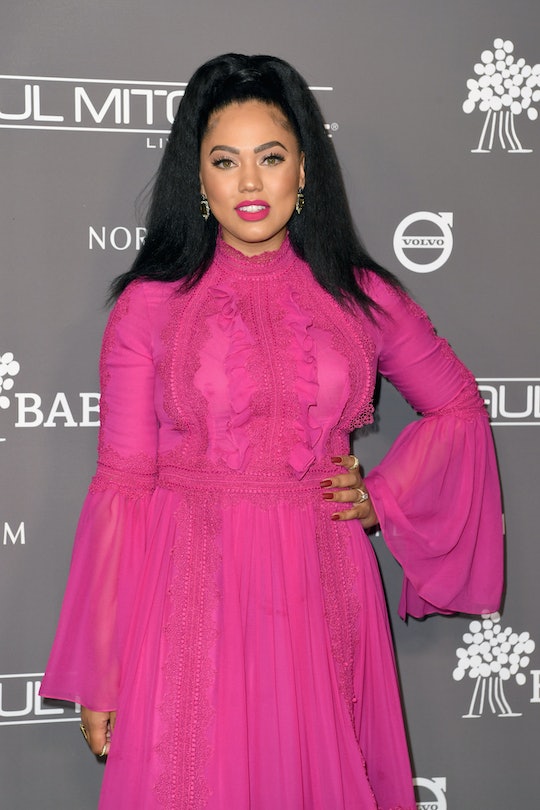 Nothing makes me happier than seeing two incredible women supporting each other. That is why I just adore Ayesha Curry and Gabrielle Union's friendship, because for them it's not just about supporting each other behind the scenes — they bring those positive vibes out for the world to see. That's exactly what happened when Ayesha Curry created this dessert to honor friend Gabrielle Union, and here's why her gesture was so sweet.

As Us Weekly reported, Curry, the restaurateur and cookbook author (who is also wife to basketball star Steph Curry) recently became involved in a tribute to the end of Union's BET show, Being Mary Jane. However, this was no ordinary tribute — it was a delicious one that only Curry could have put together!

When BET commissioned an an edible, wedding cake-themed billboard in Brooklyn, New York, they knew there was only one person they could ask to help them with the finishing touch: Curry. The New York Times bestselling author partnered with BET to bake the perfect cake, which was sliced up and placed into individual boxes within the previously mentioned billboard.

You can see the edible billboard in all of it's glory below.

The billboard was set up so that fans of the show could each take a box, filled with a slice of cake, as well as viewing information and Post-it notes from the Mary Jane character, Us Weekly added.

"Thank you @gabunion for bringing this bold and authentic character into our homes for 4 seasons. To celebrate, I created a twist on the classic wedding cake by infusing a blend of vanilla bean, satsuma mandarin, and honey," wrote Curry, whose culinary collaborations have included a pop-up with celeb chef Michael Mina, according to the San Jose Mercury News.

OMG, I really wish I hadn't been on the wrong coast for this snack.

Union noticed Curry's edible work too, writing back on her friend's Instagram: "Why I ❤️u." These two being friends and having each other's backs just makes me feel like all is right with the world. This is a prime example of how women should be supporting and lifting each other up every single day.

Curry has been very busy lately, too, as she recently expanded her lifestyle and e-commerce site, Homemade. "It's all things for the home ... from meal kits to bedding to cookware, it's all there and a one-stop shop, but it's accessible and affordable," Curry explained regarding her vision to NBC's Today show. Being a working mother of three, Curry knows the importance of needing access to affordable but quality products without having to search far and wide for everything she needs.

To be honest, considering all of the entrepreneurial things Curry has going on, it's a wonder she had time to bake a cake big enough for dozens of strangers in New York to snack on. But, that's all part of making it work — and being there for her friend.

More Like This
The Best "Stranger Things" Halloween Costumes To Wear In 2022
Gabrielle Union Admits She May Be Becoming A Bit Of A Dance Mom With 3-Year-Old Kaavia
Eden Grinshpan On Getting Your Kids To Love Fish Eyeballs (Yes, Really!)
The Best Apple Orchards Near Upstate New York