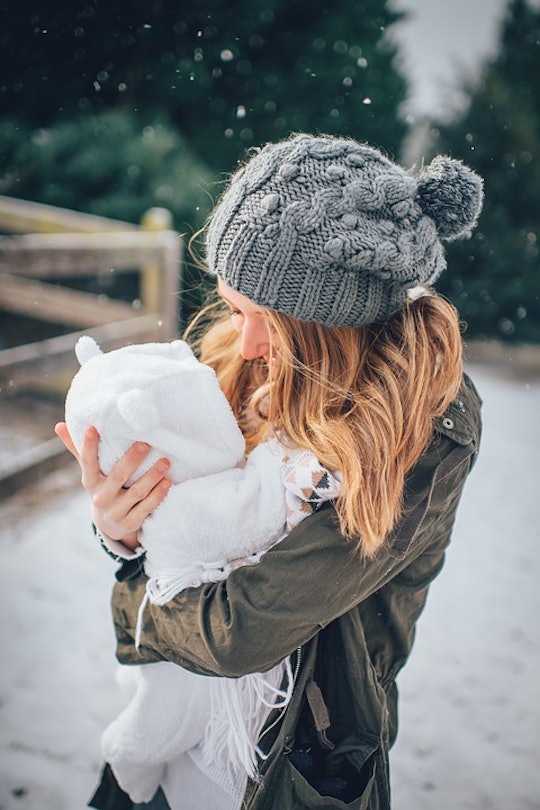 Here's Why You Should Have Chats With Your Baby

The other day I was helping out at a home daycare. I don't have babies anymore, see, and I really do need a little toddler fix with the whole world falling apart around our ears and everything. I had a great time, mostly because all of the things toddlers really enjoy (eating, dancing in circles, finger painting) are some of my favorites too. One hiccup in my day? I sort of needed a toddler translator. I couldn't breach the language gap — must have been off my game. Luckily, a new study found that babbling is good for brain development, so as it turns out, I didn't destroy those children with my nonsensical gibberish. Phew.

The study found that any sort of communication with your child, from newborn on up, will help their brains develop. Engaging toddlers in conversation, whether it's as simple as singing a nursery rhyme, reading a short bed time story or (my old standby) keeping up a constant monologue while pushing their stroller, it's all does some good. Not just for babies either; let's get real, parents need a little feedback from their babies to know they're on the right track. That they're connecting and communicating. According to Alan Mendohlson, a pediatrics professor from New York City who oversaw a study that videotaped parents practicing having conversations with their small babies',

Parents say: "Wow, look what I did there. I made a sound and my child smiled at me." The power in that is really something.

Scientists have long known that early language development comes from parents; In fact, one program in Providence, Rhode Island even set children up with what they called "word pedometers" to find out how many words they heard from parents and caregivers in a day. And while just hearing language is important, Caitlin Molina, executive director of the Providence Talks program (where parents are taught how to add more conversation with their babies throughout the day) noted that engaging children is vital to their development:

Yes, you can talk more, but what is the quality of your language? It’s not just the adult word count but the conversational turns, the back and forth, that engage the child.

These sort of programs could prove integral to children's preschool development: In 1995, a study found that language development in children born into low-income families was hindered because many children weren't having conversations with their parents, even the nonsensical kind. It was called the "30 million word" gap, referring to the amount of words heard in a day from different socioeconomic groups (according to the study, children from higher-income families heard 30 million more words before aged three).

There could be a variety of reasons; many parents have to work multiple jobs and simply don't have the time to sit and chat with their babies as often as they might like. Luckily, there are now programs like Providence Talks to offer parents coping strategies and give them the verbal tools to engage their kids.

Luckily, babbling is also kind of fun. So use it well with your kids. And use it often.