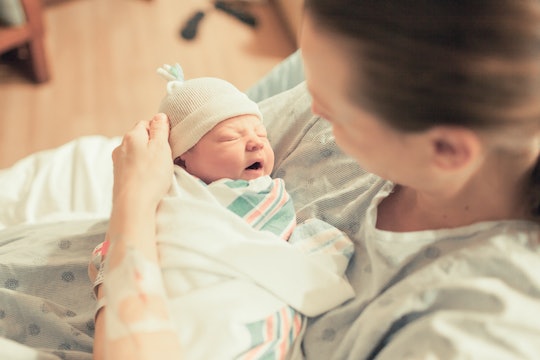 Troubling New Report Finds Babies' Health In The U.S. Is Getting Worse

With scientific breakthroughs and access to modern medicine, it seems that babies growing up right now in the United States should be healthier than ever before. Sadly, however, that's not the case. According to a new report from March of Dimes, babies' health in the United States is actually getting worse for a troubling reason, and something clearly needs to change right away.

The issue at hand appears to be this: babies are still being born too soon, and that's happening too often. Every year March of Dimes, the preeminent infant and maternal health nonprofit in the country, releases its Premature Birth Report Card, and the 2018 report card found that almost all of the 50 states saw far too many babies being born prematurely and suffering from the various health consequences associated with preterm birth.

According to March of Dimes, a baby born before 37 weeks gestation is classified as a preterm birth, and the numbers of babies born before reaching full gestation has continued to rise rather than dropping as one might expect. In 2017, according to the report, 9.93 percent of babies in the United States were born before term as compared to 9.85 percent the previous year. This margin of growth might not seem significant, but in 2018 it seems impossible that there would be any growth at all in this category.

Babies who are born prematurely, according to Today's Parent, could experience long-term health complications that might affect them for the rest of their lives like:

Despite the fact that the United States is arguably one of the most developed countries on the planet, March of Dimes gave the U.S. a "C" grade on the Premature Birth Rate Report Card. There was only one state to receive an "A" — the state of Vermont — while Alabama, Louisiana, West Virginia, and Mississippi all received an "F" grade.

Sadly, 30 states were graded even lower than they were in previous years, and March of Dimes noted that there was a definite socio-economic and racial disparity in preterm birth in each state.

"We must all come together to take concrete, commonsense steps to reverse this alarming trend," March of Dimes President, Stacy Stewart, noted in a press release of the findings. "Our country's most important resource is human potential. That begins with ensuring every baby has the healthiest possible start in life, regardless of racial and ethnic background or their family's income."

Stewart continued, "By expanding proven programs and innovative solutions we can shift our health care system to improve treatment and preventive care for moms and lower the preterm birth rate. Birth equity is our goal; it can be reached."

One of the most serious issues to be highlighted in this report is the fact that women of color are suffering the most. According to the report, they are 50 percent more likely to deliver before their due date, and they face an infant mortality rate that is 130 percent higher than white mothers.

In 2018, no parent should have to worry that their baby is more likely to be sick or die because of their race or economic situation. As this report shows, we need to do better.