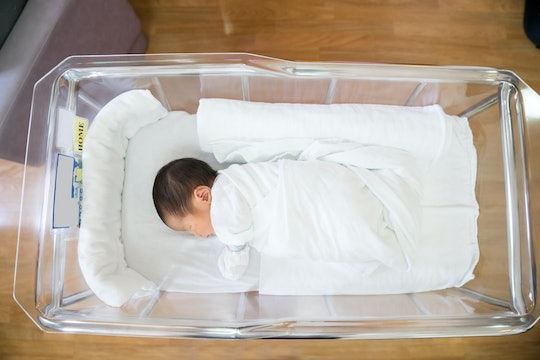 Your Baby Will Most Likely Be Born At This Time Of The Day, According To New Research

Have you ever noticed that babies tend to be born at weird times? Think about it: How often have you been eating your lunch at your desk or whatever only to get a phone call from a friend saying their baby had arrived? I'm guessing almost never, and I'm definitely right. Because a new study found that babies tend to be born at one certain time of the day, and I feel incredibly validated because I've been saying this to people for years.

A study of child birth by researchers out of the University College London in the United Kingdom was published in the medical journal PLOS ONE earlier this month. Specifically researchers looked at whether there was a time of day when most babies might be born. And after analyzing more than 5 million singleton births (which sounds like an excerpt from Bridget Jones' Diary, but I digress) in England between 2005 and 2014, they found their answer: yes. Around 4 a.m., in point of fact.

Which makes sense to this girl, because I gave birth four times and two of those births happened at, you guessed it, 4 a.m. Just like the Gwen Stefani song "Four In The Morning," but also totally different.

Researchers found that a full 71.5 percent of spontaneous births, or births that were not scheduled C-sections, for instance, happened on weekends, holidays, or between 1 and 7 a.m., according to the study. The peak birthing time happened around 4 a.m., according to the findings. As for babies who decided to come out during regular business hours, the study found that the numbers were surprisingly low; around 28 percent of spontaneous births (which accounted for just over half of the births analyzed in the study) happened between 9 in the morning and 5 in the evening on weekdays, according to the BBC. Planned C-sections, which accounted for 9.2 percent of births, tended to be scheduled for morning hours.

This kind of study is important, and not just because it proves me right, of course. Hospital administrators can use the results of this study to make sure they are staffed appropriately for times when births are more likely to happen, according to PLOS ONE. Which would mean more late night shifts, I suppose. Thanks babies.

Study lead author Peter Martin told The Bump that there could be an evolutionary reason for the middle of the night births:

Long-term experience and research from other areas has shown that human births without obstetric intervention are most likely to occur at night or in the early hours of the morning. his may be part of our evolutionary heritage. Our ancestors lived in groups that were active and dispersed during the day and came together to rest at night. So a nighttime labor and birth probably afforded the mother and newborn baby some protection.

One interesting fact about the peak birth times? While babies were born more frequently on weekends and holidays, this trend did not hold out when it came to Christmas and Boxing Day (a holiday that falls on Dec. 26). As Martin told The Bump, they were actually lower than any other day of the year. "It is not straightforward to understand why numbers of spontaneous births, without any obstetric intervention, were lower on Christmas Day and Boxing Day than on other days of the year," Martin explained to The Bump. "Selective obstetric intervention in preceding days could be an explanation but more research would be needed to investigate this."

If the researchers do start to investigate why fewer babies aren't born on Christmas, I hope they make it into a television movie for the Hallmark channel. Nothing would bring me greater joy.