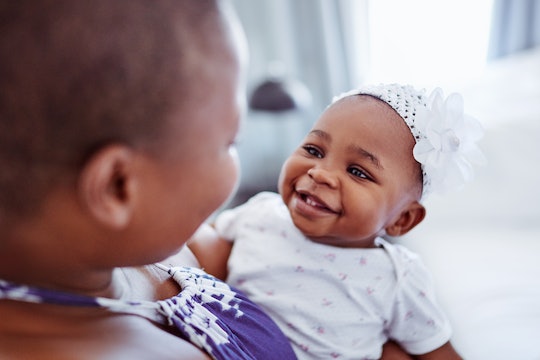 If you've been considering trying to speak two languages with your little one at home, a new study might convince you to go ahead and give it a try. Not only will you seem fancy and impressive, but new research has found that babies who hear two languages at home are able to switch their attention more quickly than those who hear just one. Bonus: they'll also sound amazingly smart when they talk.

Researchers from the Anglia Ruskin University in the United Kingdom recently looked into the effect bilingualism in the home might have on infants. A total of 102 babies, 51 of whom were raised in bilingual households, between the ages of 7 and 9 months were monitored with special technology developed to track their gazes to see how they might react to a change in their environment. For instance, babies were shown side-by-side pictures to see how long it would take for their attention to shift from one to another. And according to research published in the Royal Society Open Science, babies who had been raised in homes where more than one language is spoken were able to shift their focus to the new picture 33% faster than babies who lived in a one-language home.

Study lead author Dr Dean D'Souza told ITV News that he believes that bilingual homes "may be more variable and unpredictable than monolingual environments — and therefore more challenging to learn in," which could give little ones a leg up in their future development.

D'Souza explained that the researchers wanted to focus their attention on infants between 7 and 9 months in an effort to rule out benefits gained from actually being able to speak a second language as they would be too young. Instead, the goal was to figure out how hearing a second language at home might help them explore their environment better than a one-language home. "We know that babies can easily acquire multiple languages, so we wanted to investigate how they manage it," D'Souza said of the study. "Our research suggests that babies in bilingual homes adapt to their more complex environment by seeking out additional information."

This study is certainly not the first to look into the benefits of bilingualism for children. Last year, for instance, researchers from the National University of Singapore and the Singapore Institute for Clinical Sciences conducted a similar study of 114 6-month-old babies and found that hearing a second language helped the infants process information faster, according to The Independent. In other words, babies start to benefit from living in a bilingual household even before they can speak. So time to sharpen up those language skills.