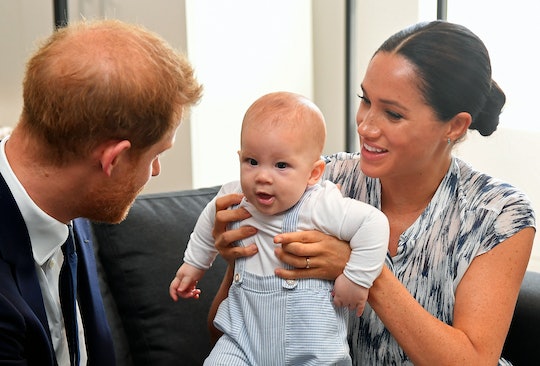 Roughly two months after the world got a glimpse of the royal family's tiniest member following his baptism, Meghan Markle and Prince Harry's son Archie made a rare appearance while in South Africa on Wednesday, Sept. 25. And oh boy, Master Archie Mountbatten-Windsor has gotten even cuter (and a lot bigger!).

The Duke and Duchess of Sussex are currently on a royal tour in South Africa, and on Wednesday, they brought their son along for some truly special activities. In fact, as the Sussexes shared on Instagram, their nearly 5-month-old son Archie was introduced to Archbishop Desmond Tutu and his daughter, Thandeka earlier today in Cape Town.

"Thank you Archbishop Tutu for your incredibly warm hospitality, Archie loved meeting you!" the Duke and Duchess of Sussex captioned a heartwarming photo of baby Archie getting kissed on the forehead by Desmond Tutu as Markle held him in her arms.

Markle and Prince Harry shared on Instagram that they were "honoured" to meet with Archbishop Desmond Tutu and have their son introduced to "a globally respected figure in anti-apartheid movement, is one of the world’s great champions of equality, and has spent his life tirelessly battling injustice."

During their meeting with Desmond Tutu, Markle was apparently joking with the Archbishop’s daughter, Thandeka, that Archie is "an old soul" and will have to get used to all the cameras and media attention, as the Daily Mail's Rebecca English reported on Twitter. However, Prince Harry reportedly replied that he thinks Archie "is used to it already." And looking at those smiles he gave cameras today, it looks like he might be.

In an adorable video shared on their Instagram Story ahead of their meeting with Desmond Tutu, Markle and Prince Harry can be seen walking with Archie, who wore a blue striped jumper. In the video, Prince Harry says to his son, "You get to meet Arch! Arch! Arch!" and then Archie lets out the cutest baby giggle and gives the cameras a wide smile.

From that video, Archie seems like one energetic little guy, and apparently he is. Also on Wednesday, Prince Harry reportedly revealed that their son, who was born in May, "constantly wants to stand," according to People. Who knows, maybe baby Archie is just trying to keep up with his royal Cambridge cousins, Prince George, Princess Charlotte, and Prince Louis?

Archie's appearance today was certainly exciting since the last time the world got to see a glimpse of the little royal was back in July following his christening ceremony. And before that was a few days after he was born on May 8 when Markle and Prince Harry did a photo call with a reporters inside Windsor Castle. At the time, Markle said motherhood was "magic" and added that baby Archie "has the sweetest temperament" and is "really calm," according to Good Morning America. As for Prince Harry, just days after his son was born, he said, "parenting is amazing."

On Wednesday, Markle and Prince Harry were all smiles, and with a cutie like Archie by their side, how could they not?