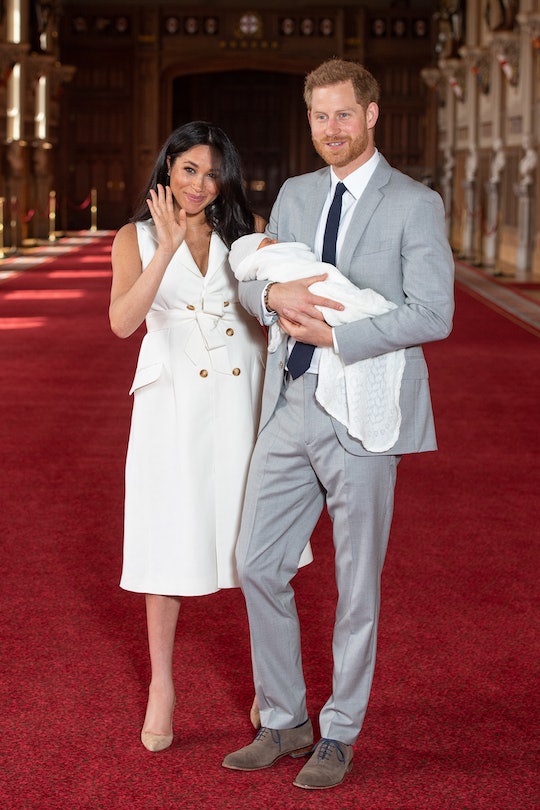 Archie's Godparents Won't Be Revealed, So You Can Officially Stop Speculating

Young Master Archie Harrison Mountbatten-Windsor has not yet been alive two full months, and yet he's already the topic of much media speculation. Not because of anything he's doing, obviously. I mean, he can't really talk or walk yet so it's not like he's a big magnet for controversy. But because his parents, the Duke and Duchess of Sussex, are famous people, he is famous too by extension. Archie will be in the spotlight very soon with his christening around the corner, but there's some bad news. It seems that baby Archie's godparents won't be announced to the public, so everyone can stop placing their bets now.

The royal family are big into christenings, just in case you were wondering. While the christening itself is generally held privately inside one of the official royal churches, like St. George's Cathedral at Windsor Castle, there tends to be a bit of a media frenzy regarding those in attendance. And definitely a media frenzy to find out who might become the godparents to the new royal baby, because godparents can play a very important role in a child's life. Not just as their de facto spiritual advisors (since godparents are traditionally charged with helping their godchild's religious education along), but also because they have now been set apart from various friends and family as someone vitally important to the child. Someone who has pledged to love the little one throughout their life.

It's a big deal, but don't expect to find out about Archie's godparents any time soon — or ever.

So here's the latest news on Archie's christening. According to media advisory from shared on Twitter by royal reporter Omid Scobie, the ceremony is expected to be held at the private chapel at Windsor Castle on Saturday, July 6. This is a bit of a departure from the much more public St. George's Chapel where the christening of 1-year-old Prince Louis, the youngest child of the Duke and Duchess of Cambridge, was held. Not to mention where the couple were married in May 2018. The media advisory noted that the couple are planning on a small "private ceremony" and will share photos from the event from royal photographer Chris Allerton that day.

As for the godparents, they will not be sharing their identities. "The godparents, in keeping with their wishes, will remain private," the media advisory reads. So, I guess, I'll never know if Markle's good friend and tennis queen Serena Williams was made one of Archie's godmothers.

While there might be some royal fans who are taken by surprise by this decision to keep Archie's godparents a secret, the move is actually in keeping with the way the couple have been raising their son so far. When he was born on May 6, they eschewed the traditional photo shoot on the steps of the hospital just hours after his birth (which Kate Middleton had done for all three of her children) in favor of an interview with reporters a few days after Archie's birth.

I understand that people are curious about everything Archie these days. But the reality is, his parents have every right to a little privacy whether they are members of the royal family or not.

As do Archie's eventual godparents. I'll just go ahead and pretend Barack Obama and Serena Williams took over the role and ignore reality.