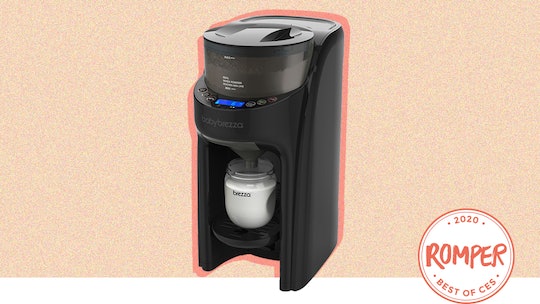 2020 sounds like some kind of futuristic world, and thanks to innovative baby gear, it kind of is. There are few things better than a tech update to make your life easier (like setting the coffee pot before you go to bed), and Baby Brezza has jumped on this with their new Baby Brezza Formula Pro Adavnced with wifi. Their new product literally lets you make your baby's bottle from bed. But not only can you make a warm formula bottle any time with a touch of an app from anywhere, but it will also track your baby's feedings and auto-order formula for you so you don't run out.

Romper saw the he Baby Brezza Formula Pro Advanced with Wi-Fi in action at the Consumer Electronics SHow (CES) in Las Vegas this year and it looks like the smartest formula maker of all time. It'll be available in April of this year, and and $280, it's not cheap, but here's hoping like all tech, it'll get less expensive at the decade rolls on.

Via the app, you can create four different customizable bottle settings, customize every bottle with three temperature settings and in 2 to 10-ounce increments, and "automatically make a perfectly mixed, warm formula bottle instantly — all from your bed." (Remember that scene in Look Who's Talking where single mom Kirstie Alley is trying to prepare formula in the middle of the night during those first few hell months, and she pours her coffee into Mikey's bottle and his milk into he coffee cup? If only poor Kirstie Alley had this Baby Brezza formula maker. She would have been able to enjoy her coffee...)

I already love Brezza for their Glass One-Step Baby Food Maker, which steams and purees at the push of a button. And the One Step Baby Bottle Sterilizer Dryer that sterilizes and dries pump parts, bottles, nipples, and other infant accessories. I mean, that was the worst part of pumping for me, having to clean the parts after every session. So it sounds like Baby Brezza knows what could make parents' lives a little easier, and prepping a bottle from bed? Well that's the dream.

Editor's note: This post has been updated to note that Romper viewed this product at CES.