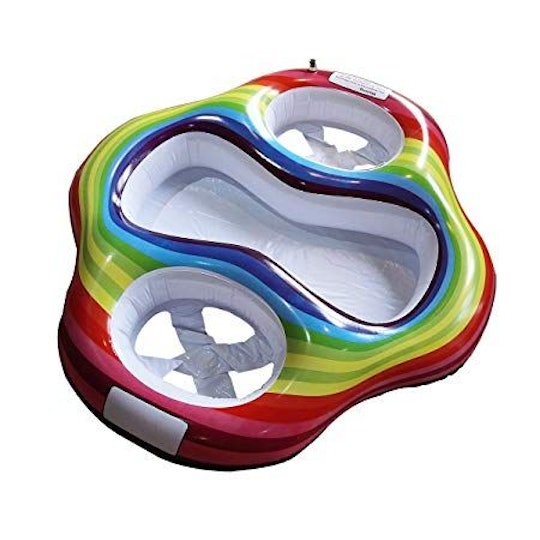 Having an infant and coming up with fun and entertaining summer activities for them is hard enough. Throw twins into the mix? It can be much, much harder since it’s double the trouble. How can you keep them entertained, cool, and safe while also keeping yourself entertained and cool? For the last few years, wacky sprinklers and pool floats have been all the rage, and this amazing rainbow baby pool float for twins is no exception. For just $35 on Amazon, this inflatable double seated pool float will be as functional as it is fun to look at. The middle has plenty of room for all of your kids’ toys, and the seats have large holes so your baby can sit facing the inside, outside, or everything in between.

Now I don't have two children, but I do have two beagles. I wonder how they'd like lounging in this pool float? Maybe one of them can share with my baby, because as long as your babies (or beagles) are pretty close in size (so it doesn’t topple over on one side), this float is great for children (not beagles, I guess) ages 6 months to 3 years old — and as always, please use adult supervision. The Amazon reviews were all pretty stellar, except for the one reviewer who was embarrassed to give the float as a gift because it came in a manilla envelope instead of a box? But anyway. One reviewer said it was perfect for her 1-year-old twins and it kept her stress levels low because she could keep both of them in one place. All the other reviewers were just as impressed, with all of them saying their twins absolutely loved it. Which in turn made the parents love it, obviously. “Rick” did say to check for a slow leak when you get the float, because his came with one. However, he said he received a full refund — so pretty good customer service, too.

If a rainbow float isn’t your thing (but seriously, why not?), The Home Depot, Amazon, and Walmart are selling a baby float for twins called the “Mommy and Us Dual Baby Seat Pool Float” for just $34 (at Home Depot). This one is really neat because there’s a spot for Mom or Dad to float in the middle while the babies are on either side. There’s still the spot for toys, and the decor is beach-themed with crabs, starfish and ocean fish. It’s pretty cute. This particular float can hold two 40-pound children and comes with four inflatable “sea creature friends,” according to the Amazon description. And they can be different weights and sizes. Pretty durable.

So if splashing and fun in the sun is in the cards for you and your twin babies this summer (or siblings who are similar in size), check out the rainbow baby float for twins on Amazon. And if you’re looking for a rainbow pool float just for you, there’s always the Giant Cloud of Rainbows Pool Lounger By Sun Squad at Target, also for under $40.