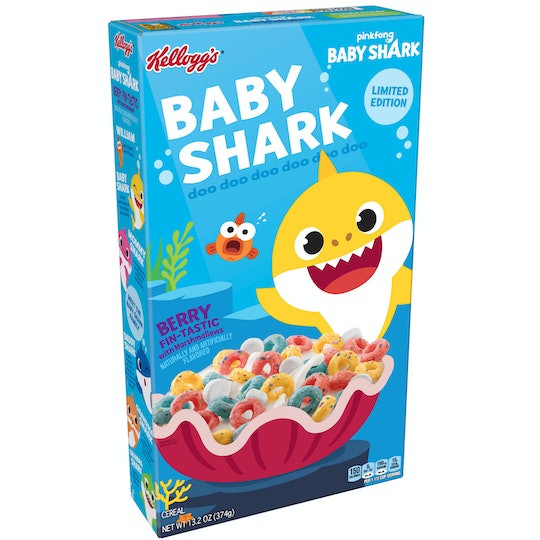 Try as you might, "Baby Shark" cannot be avoided. At least, not if you're the parent of a toddler or spend any amount of time on the internet. First, it took over YouTube, then the music charts, and children's toys. Soon it will take over televisions with a Baby Shark TV series. In fact, it almost seems that, like another infamous shark, "Baby Shark" has continued to resurface every time it finally appears safe to go back in the water, err, I mean, online. Well, hold on to your life vests, because the Baby Shark craze is set to take over the cereal aisle next. Kellogg's is bringing Baby Shark cereal to Sam's Club and Walmart in just a matter of weeks.

"We know 'Baby Shark' is a catchy tune that has captured the hearts of many families," Erin Storm, Kellogg's marketing director all family cereal said in a recent press release, as Bustle reported. "New Kellogg's Baby Shark cereal was created to expand on the joy families feel in a tasty way."

Kellogg's appears to have teamed up with Pinkfong, the South Korean children's educational entertainment brand responsible for creating the viral tune to produce its Baby Shark cereal. Described on the box as having a "Berry Fin-tastic" flavor, Kellogg's tells Romper the cereal is comprised of flavored rings and marshmallow pieces that "deliver a delicious splash of flavor that doesn’t miss the boat."

What's more, the box's bright blue coloring and unmistakable Baby Shark character are sure to catch your child's eye as you stroll down the breakfast aisle.

Kellogg's tells Romper that its Baby Shark cereal will be available exclusively at Sam's Club beginning on Aug. 17. Baby Shark fans will be able to pick up a two-pack of the cereal for $5.98 (gotta have enough for Baby, Mama, Daddy, Grandma, and Grandpa Shark). The cereal will then be made available at select Walmart stores in a single pack in late September, according to Kellogg's.

But while many a parent has found that it can take months, even years, to get the "Baby Shark" tune fully out of their head, shoppers shouldn't expect this Baby Shark-themed breakfast option to stay on shelves anywhere near that long. According to Bustle, Kellogg's has said the cereal will be around only while supplies last.

Interestingly, Kellogg's isn't the only company to roll out something Baby Shark related in honor of Shark Week. According to The Philly Voice, Evil Genius Beer Co. has created a pale ale named Baby Shark Doo Doo Doo Doo Doo Doo, which will be available for sale by the glass, four-pack, or special "Bucket o' Sharks" during Discovery Channel's Shark Week.

And if you do decide to pick up a box of Baby Shark cereal while at Walmart, you may also want to take a peek at the retailer's Baby Shark beach towel. The machine washable, 100 percent cotton towel features not just Baby Shark, but Mommy Shark, Daddy Shark, Grandma Shark, and Grandpa Shark too.

Love it or hate it, it seems as if the Baby Shark craze is here to stay and parents may do well to just embrace it, cereal and all.