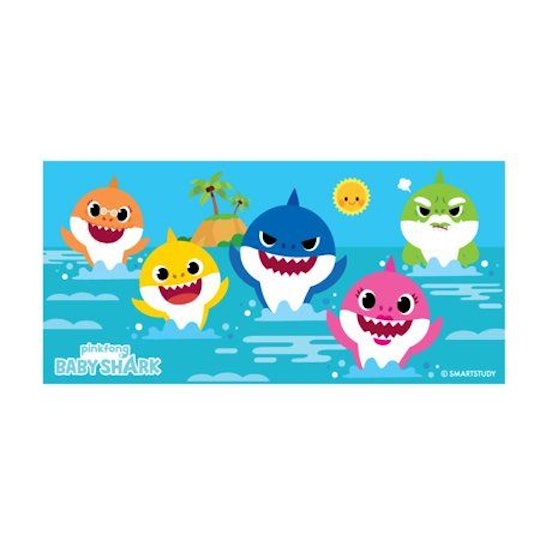 Have you heard of a little song called "Baby Shark" (doo doo doo doo doo doo)? Oh, yeah? Me too. Well I’m sure you’ll be oh so happy and excited to know that not only is "Baby Shark" an incredibly popular song and video on YouTube, but there is now a Baby Shark beach towel at Walmart for less than $10. You’re so welcome. Your kids will be so stoked to lounge on and dry off with this beach towel inspired by their very favorite video and cast of sharks.

But back to this epic towel. This 100 percent cotton towel is machine washable and huge for ultimate snuggability at 28”x58”. Plus, the entire shark family is on there, ready to sing and dance with your child as they dry off pool, lake, or beach side while singing their favorite song. It’s also machine washable, which is a huge win for parents (a small consolation prize for Baby Shark infiltrating your life).

The reviews for the Baby Shark Beach Towel are pretty positive, with the exception of one reviewer that they should cost $5 instead of $9. However, it was praised for "being brightly colored and perfect" and their "daughter is obsessed."

But if you feel like you still aren’t getting enough Baby Shark in your life, you could always grab Baby Shark Song Dolls (in cube or regular form) for each member of the shark family, a Baby Shark Wood Sound Puzzle, which also plays the Baby Shark Song (of course), or Baby Shark Kids Bedding Sets, which include beds in a bag, comforters, sheets, pillows, throws, blankets, and even body pillows. These bedding sets are exclusive to Walmart, by the way.

And for items that don’t play the beloved song, Walmart has toddler-, baby-, and kid-sized Baby Shark clothing, which I have to admit are pretty cute, dang it. So what do you think? Doo doo doo doo doo doo you think you need all the Baby Shark in your life, including the fantastically soft and snuggly Baby Shark beach towel? I think you doo doo doo doo doo doo. I'm sorry, it's just that misery loves company, and this song is officially stuck in my head so deeply that I now need to share it with you. Over and over. Like your kids.

Whether your kid is super Baby Shark obsessed or just loves to sing along, this towel is a great choice. Use it for the beach, the pool, for picnics in the yard, or a towel to throw down during craft time. It's bound to make your kids happy in some way.