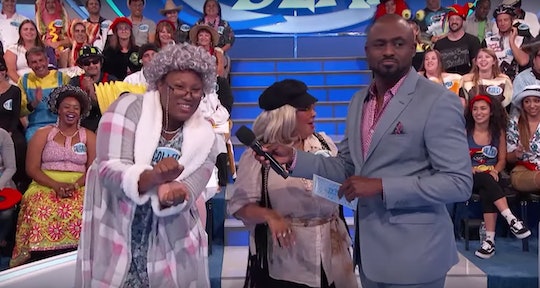 As if it's not bad enough I have to hear this song every day at elementary-school pickup (did I mention every single day?), a certain tune about young baby fish has now made its mark on game shows as well as school, parks, and workout classes. Baby Shark took over the Let's Make A Deal set, so it seems that world domination is now complete.

In a Romper exclusive from the CBS daytime program's episode airing on March 27, contestant Colleen dresses up as the Grandma Shark character from the song and teaches dubious host Wayne Brady about the whole thing along with the help of an on-set cameraman, which leads the whole audience to sing along to this now-universal anthem together.

In other words, if you thought the catchy ditty was finally going away, you'd be wrong.

In fact, as Vox recently reported, The Best of Baby Shark has topped kids’ album charts and hit the No. 28 slot in overall album sales. The 17-track album includes the basic original version of the tune along with updated mixes (like the holiday versions).

The song itself hit the influential Billboard Hot 100 list earlier this year, according to the outlet. Not bad for a song that came from nowhere in 2016, according to CNN, which noted that the phenomena's OG video, (featuring two cute kids in what looks to me like pajamas) is one of the most-viewed videos in YouTube history.

From its humble, K-Pop beginnings, though, the song really caught fire, as Vox added.

It went viral in countries the globe over, according to CNN, inspiring specific versions (such as the German-language version on YouTube) and then worked its way onto late-night talk shows, into the hearts of celebrities like Kylie Jenner and even into exercise classes.

And don't forget some of the most memorable offshoots of this cultural craze: The dad who taught his daughter CPR to the beat of the tune. Or the little girl who wouldn't stop until Google's Alexa could understand her request to play "Baby Shark."

So it makes sense the trend would hit Let's Make a Deal, too... since nothing and nowhere is safe. After all, Ellen and other first-name-only TV celebs have already been hit with the "Baby Shark" stick...why not Wayne Brady?

The funny part of the Let's Make a Deal clip is the fact that you can see at first that Brady doesn't get it. Why is everyone starting to clap their hands straight in front of them? Why are people smiling?

Brady doesn't realize that you just can't resist that kind of a song; according to the Daily Beast, catchy music that's easy to learn yourself hits the pleasure centers of the brain... not just for kids but for adults, too.

Meaning that it's useless to resist this fun tune. Look for more versions... and eventually maybe even the TV show (hey, ABC News reported the creators of the song have already inked a content deal with Netflix).

Eventually, it will fade a little into the distance, like any other kid trend we've also survived, from emojis, to Frozen, the Minions, or any Stars Wars character or universe ever created. Remember "Gangnam Style," guys? We got through that one, remember? We can do this!

Have fun and rock out in the meantime.

Let's Make a Deal airs on weekday afternoons on CBS.