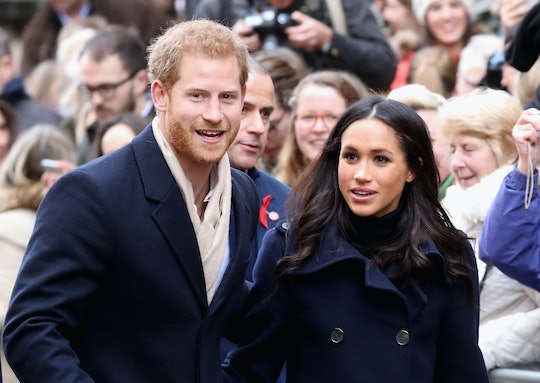 A royal’s work is never done — even before it’s officially begun! In case you missed it, Baby Sussex is already thanking royal fans on Instagram for donations made to four charities in lieu of baby gifts. On Monday, the soon-to-be royal baby joined his or her parents, Prince Harry and Meghan Markle, in thanking the public for their generosity, and sharing what a difference the donations are going to make.

The caption on the post — a simple photo of Markle and Prince Harry at a Canada House event — points out that it was one week ago that the couple requested that the public turn any desire to send baby gifts into the very actionable step of donating to charity.

That was an idea that had already begun to take life on social media, and was dubbed #GlobalSussexBabyShower, according to The Independent. It was started on Britain’s Mother’s Day, March 31, and turned the spotlight on three charities that are particularly close to Markle’s heart.

Twitter user @freepeeper was the instigator of the idea, writing: "We’re kicking off a global fundraiser on Sunday, 31st March in honour of #BabySussex and the compassion and altruism of The #DukeandDuchessofSussex. We’ve selected three charities to benefit in this effort. Tweet your donations and include the hashtag #GlobalSussexBabyShower."

The account also recommended that users screenshot and tweet any other donation of money or time that they chose to make outside of the ones recommended. Within days, the global baby shower raised $35,000, according to Hello! Magazine, and following its success the Duke and Duchess of Sussex were inspired to ask their fans to consider a donation to charity, too.

"In lieu of sending gifts, the couple have long planned to encourage members of the public to make donations to select charities for children and parents in need," Markle and Prince Harry wrote on an Instagram post. "If you already made a donation, the couple send you their greatest thanks. If you are thinking about it, they ask that you kindly consider the following organisations they’ve selected, which we will highlight here over the next few days: @thelunchboxfund, @littlevillagehq, @wellchild, @baby2baby."

And then on Monday, April 15, the three Sussexes took to Instagram to with an update:

Just one week ago, The Duke and Duchess of Sussex asked that you kindly consider supporting various organisations around the world in lieu of sending gifts for the upcoming arrival of their first born. Not only did many of you lend your support, you took action. Their Royal Highnesses wanted you to know the impact of your support — the direct effect your donation, energy, and action made! YOU chose to be part of the collective good, and you have made a real difference. Whether a $5 donation, £1000 contribution, offering to volunteer, or spreading the word —  you’ve played your part. And on behalf of The Duke and Duchess (and Baby Sussex), we thank you so much.

They also shared an update on what the contributions have provided for their suggested charities.

According to their post, the Lunch Box Fund was given funds to provide 100,000 hot, balanced meals to children “in dire need across South Africa.” The surge in donations to The Little Village increased monthly sponsorship, brought in new volunteers, and “re-energized their hard working team of 200+ staff an volunteers.” And medical need charity WellChild “can now provide 300+ additional hours of specialist care by a Well Child Nurse for a child with serious health needs.” And finally, Baby2Baby received over 5,000 products to distribute to kids in need including cribs, books, backpacks, diapers and cash donations.

The post ended with a sweet note: “You made this happen. Thank you.”

What better way to start life than by inspiring so much generosity and support for great work. See you soon, Baby Sussex!