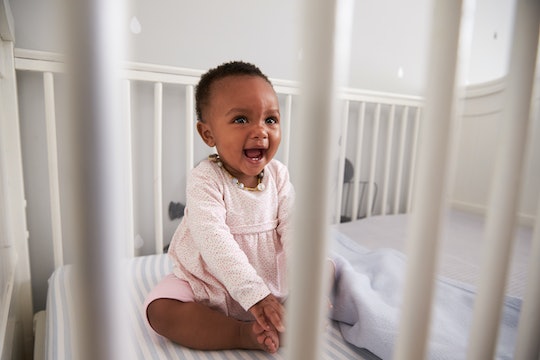 Guys, We Need To Talk About Babies That Won't Nap

There are many things that can make parenting a small child rather frustrating. And by “rather frustrating," I mean make mom want to repeatedly smack herself in the face with a rubber spatula. There’s the child who spits out every single food item you put into his mouth. The kid who loves to void her bowels the second her bottom makes contact with a just-filled bathtub. The little darling who likes to kick you directly in the throat around 3 a.m. But I can honestly say nothing made me more insane than "nap-time". Because my baby simply would not nap.

Even just the word “nap” still makes me twitchy. It brings on memories of staring pleadingly down at my child, while the xylophone version of “Don’t Stop Believin'” played over and over… My son would watch me from his stroller/crib/swing, wide-eyed and expectant, while the minutes just ticked away, making it very clear that it was in fact time to stop believin’. The gods of slumber would not be descending, and my dreams of writing an email or washing my hair were but the delusions of a fool.

I reached out to Dr. Jennifer Trachtenberg to ask why some babies struggle so much with napping. Dr. Jen — as her patients call her — is a nationally renowned parenting expert and board-certified pediatrician. She tells Romper that babies can struggle with daytime snoozing for a variety of reasons: "It can be that they are over-stimulated and over-tired and have a hard time settling down to take a nap. Also, it can be because they are not tired if you are trying to get them to nap too soon."

She does offer a few basic pointers for helping to lull a little one into a sleepy state, suggesting parents help their kids along by "giving them a quiet environment, perhaps some quiet down time first, or even a small snack. Some holding or snuggles may also help to ease and transition into nap time. If baby is greater than one, a transition object like a stuffed toy can be helpful too."

But... are naps really even necessary? "Yes. Napping is important as children need a lot of sleep to grow and develop, as well as to regulate mood. An overtired baby can be very cranky and irritable," Dr. Jen says. "Baby tends to have a set pattern and routine for sleep including naps. Try to keep it consistent. Not every day will be the same, but a general routine will make it easier for baby to transition to nap."

My son stopped napping completely around the 18-month mark. I mean no nap at all. Unless of course he was in a car, and it was the worst possible time to nap. Then he would gladly pass out at 5 p.m., sleep for 90 seconds, and then somehow be rejuvenated enough by that minute and a half of slumber to party until midnight.

His napless ways initially made me crazy, as they complicated plans and playdates. Other parents would be all, "Well, Zachariah does his first nap pretty early. Then his big three-hour nap is around noon. So maybe after then? When is nap time for you guys?"

I would quietly explain that my child doesn't nap, and they would stare in horror: "Doesn't nap! Bummer!" To which I would give a tight smile, and will myself not to purposely pour my Americano onto their shoes.

Dr. Jen acknowledges that, while naps are indeed important, it does all kind of depend on the kid. "Each baby is different. Some need a bit more and others a bit less. You can usually tell if your child still needs naps by their moods — if they get irritable or even melt down when they don't have them. So follow their lead and let them nap if they need it. They will let you know when they have outgrown a nap."

That they will. And I can honestly say that once I let go of the whole idea, and just accepted that napping wasn't part of our routine, I realized it actually made things a lot easier. There was no planning or structuring the entire day around the possibility that he might or might not pass out for 20 minutes at some point. We could just get up and go and do our own thing.

Another positive: my kid has always had an early bedtime, and goes to sleep fairly easily. Those same parents with the kids who snooze the day away? From what I can tell, it sounds like they're often watching their kid throw Duplo blocks around the living room until 10 p.m. or later. To which I say: Bummer!