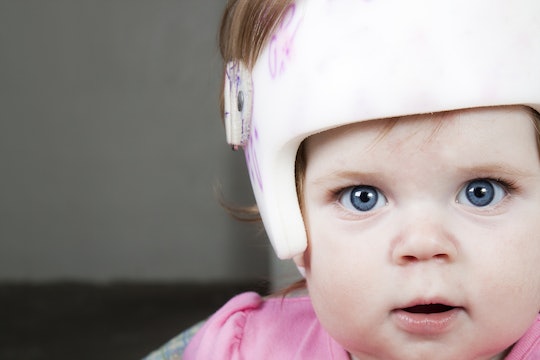 If Your Baby's New Helmet Is Disturbing Their Sleep, Here's What You Can Try

Sleep training my son was a nightmare, so now I’m one of those moms who schedules everything — and I mean everything — around Jack’s naps and bedtime. Nothing can get in the way of us putting that child into his crib at 9 a.m., 2 p.m., and 7:30 p.m. every day. When we found out Jack would need a helmet because he had plagiocephaly (aka, a mishaped head), my first feeling was pure terror. Would this mess up his sleep? Surely it couldn’t be comfortable. What if my baby won’t sleep with a helmet? Everything else up to this point as far as his sleep goes has been the worst. I was so scared that one little thing could throw everything off and we’d be battling at nap time and bedtime and having to sleep in 20-minute increments day and night all over again. To say I have PTSD from this experience is an understatement.

Is your baby now donning a fabulous DOC Band (helmet) and not sleeping? It could be something to do with the baby’s temperature according to Michelle Hefner, a clinician at Cranial Technologies, Inc., in Atlanta, Georgia. “In the first few days of wearing the band, the babies can be warmer, as their body is adjusting to having the head covered 23 hours per day,” Hefner says. So basically, your baby is wearing a hat to sleep in, and things could get a little warmer than usual for them. I don’t know about you, but I absolutely cannot sleep when I’m hot. In fact, I have to have a fan on even in the dead of winter while my poor husband sleeps with sweatpants on. Maybe he needs a DOC Band to keep his head warm, too?

Thankfully, babies' bodies adjust within two or three days, according to Hefner. She suggests dressing your baby in lighter clothing to sleep in, maybe even one layer less than they normally sleep in to see if that helps make them more comfortable. Also, thankfully, it probably isn’t the helmet making them super uncomfortable when they sleep. “The DOC Band is custom made to the baby’s head shape. Gentle forces are applied to the head shape to encourage growth into the flattened area,” Hefner explains. “Babies find the bands comfortable very quickly. The outside of the band is made of a thermoplastic, giving it a hard shell, and the inside of the band is made of a soft, medical-grade foam.” Additionally, all the materials are medical grade and tested for “biocompatibility,” i.e., they’re compatible with your baby’s skin and scalp.

Worst case scenario, if your baby isn't sleeping well since wearing their helmet, it could be because the helmet isn’t fitting properly for some reason. When you first take your baby home with their band on, you’ll be asked to check your baby’s head for redness in spots to make sure it isn’t pressing too hard anywhere on the scalp and it fits properly. Jack would have red spots on his temples at first, for example. Hefner says as long as the redness goes away within the hour, they’ll be OK and their head is just adjusting. However, if the redness lasts longer than an hour, you need to go back to the clinic and have them re-measure and re-adjust the helmet to make sure it’s fitting properly and comfortably.

It was a little bit of an adjustment at first, but Jack is sleeping well with his helmet on and isn’t as completely angry about it as he once was. And his head is already looking rounder in just one month. Now he’ll be able to wear glasses comfortably and be fitted for bike or sports helmets in the future. If your baby's having trouble sleeping with the helmet on, check the temperature of their room, and try dressing them in one less layer when you put them down if possible. They could just be hot — they're wearing a hat to sleep in after all.