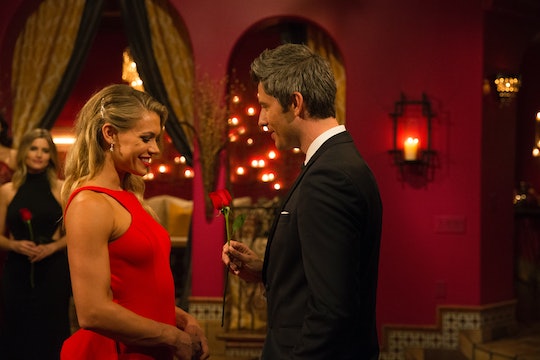 Arie Luyendyk Jr.'s season of The Bachelor had a couple of potential villains in the mix before a standout appeared. While Bekah is suspiciously chill and Chelsea is a little aggressive, Krystal is hands down the fanbase's least liked contestant this season. Among the qualities that grate on viewers are her raspy voice, which she combines with a syrupy way of speaking that has Twitter at its wits end with her "slutty baby voice." In fact, Bachelor fans can't stop making fun of Krystal's voice, but by this point, they should know better. Policing someone's voice is no better than making fun of their body, their race, their parental status, or their sex choices.

It does sound like Krystal has a particularly intense case of vocal fry in the show, but, as some enterprising Redditors deduced from looking at her Instagram, it actually seems like she was sick during the early weeks of filming. If you scroll through and watch her backlog of fitness videos, she speaks with a much clearer tone and no raspiness. So it does seem plausible that she was recovering from a severe sore throat in the early days of shooting, especially given the grueling filming schedule. She probably wasn't getting much sleep at all or a chance to heal. And chatting for a literal 12-hour-long cocktail party probably wasn't helping matters.

But even if Krystal's voice is as raspy as it is on the show, it's still way out of line to mock her for a trait she doesn't have much control over. Could she technically practice speaking with more breath support to eliminate her vocal fry, and switch the cadence of her flirty manner of speaking to a more "serious" and strong one? Sure. But why, if she doesn't want to or care that much?

The ways we speak can sometimes develop in response to an impossibly complicated tapestry of how we're regarded in the world and treated by others. So, yes, many women develop vocal fry, sultry flirtatious tones, a high-pitched "baby" voice, or peppy uptalk as a survival technique to navigate the never-ending sh*tstorm of moving through the world as a woman.

Gigi Buffington, assistant arts professor in NYU’s Tisch Drama department, spoke with IntoTheGloss about this very issue. "Women have learned these conditions," she explained. "They have received approval for them and their voices reflect it." Buffington went on to say that speaking in this way can sometimes make women feel "safe." That's because "it keeps people in positions of authority feeling like they’re in positions of authority." So to make fun of someone for how they adapt to an environment of oppression is actually really disturbing.

And in Krystal's case, we know there was intense trauma in her childhood, so that makes it extra mean. She opened up on the show about how her father had abandoned her family, her mother was emotionally neglectful and so poor that Krystal had to save up for her own comforter as a child. Meanwhile, her brother is homeless and relied on Krystal during a recent hospitalization. It's clear she's been through a lot and it's also clear she's developed a specific set of defenses, boundaries, and other adaptive behaviors to take care of herself in response. We can argue whether an environment like The Bachelor is really the healthiest place for her to be, or whether it's a triggering environment that just opens her up to more misunderstanding, scrutiny, and neglect, but to mock her for voice? That's a bad look.

It's not clear how much longer Krystal will be on the show, but perhaps it will be long enough for fans to interrogate what it really is about her that annoys them so much, and to see that their judgements have not a whole lot to do with who she is as a person.