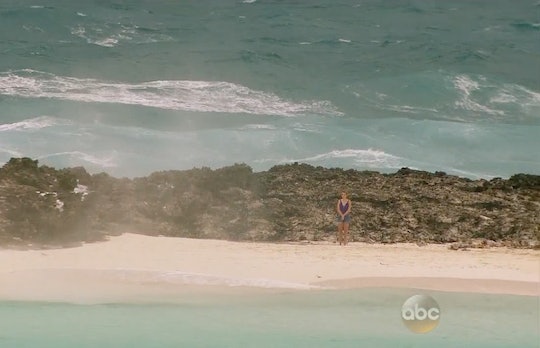 It's what you've all been waiting for (except those of us that have become attached to the catty drama that seemed to follow The Bachelor contestant Olivia everywhere). Ben finally kicked the Texas-born news reporter off the show in an out-of-character display on Monday night. (Tell me you didn't wish that turn of events into existence ... like, three weeks ago.) Shortly after Olivia's elimination, Bachelor fans were even tweeting about #HurricaneOlivia after the contestant's stormy exit, further proving that even in her absence, the girl can seriously stir up drama.

So, here are the dirty details. After weeks of starting fights, getting on everyone's bad side (even Ben's), and wreaking havoc among the contestants, Olivia was kicked off the show during Monday's fateful last two-on-one date. Worse still, when Ben dumped Olivia, he left her standing on a sand bar in the middle of the Bahamas. Sound awful? Well, that's not all. The wind and weather surrounding the moment were crazy — just crazy enough to spur a new nickname for the former contestant: #HurricaneOlivia.

"#hurricaneolivia making its way through the Bahamas," joked one Twitter user as the camera panned back out over the sandbar, showing a dejected Olivia standing haplessly along the shore as the winds suddenly began whipping up a storm.

The elimination comes after an episode teaser previously released featured Olivia telling Ben she wasn't getting along with the other women because she was "different."

"Everybody here's, like, really into painting their nails and doing each other's hair, and that's great, but I'm just different," Olivia told Ben in private, earlier in the episode. "Like, I like reading books in my room and, like, thinking, and that's what I do — and I want to talk smart things."

So, needless to say, after that painful exchange, Monday's elimination might not have come as a surprise to many. But, face it, Olivia grew on many fans with her antics that never ceased to entertain. (Think joking about her cankles and jumping out of a stripper cake.) Or maybe you remember this now-famous moment:

After a really weird group date with Lauren B., Becca, Amanda, JoJo, Lauren H., and Leah, which involved swimming with pigs, Ben sent Leah packing as well for bashing Lauren B. — unacceptable in Ben's eyes.

This week's episode was particularly rough for everyone involved, but especially Olivia, who ended up laying it all out on the line before being dumped. "I'm more of an introvert — I'm very grounded, I'm very in tune with my body, [and] I'm really strong, I'm really confident," she told Ben, just before Ben's abrupt elimination. "I like news and politics and religion, deep intellectual things are just my jam. ... From the moment I met you I knew that it was right and I'm like, I'm in love with you."

Ben, wasn't impressed, and sent Olivia home shortly thereafter, even though Emily had seemed certain she was going to be the one to leave. The dramatic fadeout that followed had many wondering how long ABC was going to make poor Olivia cry out there in the rain—er... "hurricane."

It may all seem a it harsh, but at least Ben had the decency to cancel the cocktail party after all this week's drama. Talk about a perfect storm.