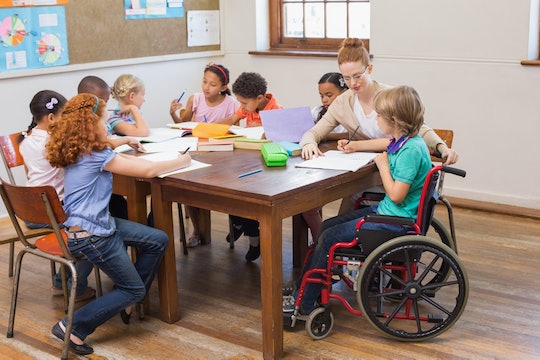 It’s Back To School & That Means Segregation For My Kid

School starts this week and I’m scared. Freyja, my 6-year-old daughter, isn’t scared at all. She had a great kindergarten year and can’t wait to go back. Every time we’ve passed her school over summer vacation, she’s waved enthusiastically. “Hi school!” she calls. “See you soon! I can’t wait for first grade!” For weeks, we’ve been talking about who her teachers will be, who will be on her bus, which kids will be in her classes. But she isn’t the one who needs readying. It’s me.

Freyja was born with a very rare neurological condition called pontocerebellar hypoplasia. She is unlike most other children with this diagnosis in that while her disabilities are significant, she talks, walks with a walker, and learns. She knows her letters and numbers and can read about a dozen or so sight words. She draws, plays with her kitchen set, loves princesses and dress up, dancing, swimming, ice skating. She likes to help cook and bake and is generally like any other 6-year-old kid anywhere. Except that she can’t stand independently or walk independently. She can’t do anything physical — including feeding and dressing herself — without some adaptation or assistance. She has dyslexia and complex-language processing issues. She can write, but it takes her 15 minutes just to write her name. And she has oddly inconsistent lapses in her memory that are very hard to work around in a classroom setting. We have spent countless hours and thousands of dollars putting her through neuropsychological evaluations, tests, appointments, and observations all intended to direct her development and education. And all the while, I have argued for inclusion.

I don’t want schools to be a place where children like Freyja are always other because I don’t want them to grow into adults who are other.

I believe in integration with all my heart and soul. I believe that humans learn tolerance and respect for other humans by seeing them, by interacting with them, by getting to know them. Exposure to people of all walks of life normalizes people of all walks of life. Studies show that children with disabilities are more successful in inclusive environments and I believe it is equally beneficial for typically developing children to have atypical children in their midst. It is the best way to prepare our children for the real world, which Freyja will have to navigate without a team of specialists and teachers and doctors and parents. I don’t want schools to be a place where children like Freyja are always other because I don’t want them to grow into adults who are other.

Our school district assured us they felt the same way, and Freyja was placed in a general education classroom for kindergarten. She loved her teacher and made a lot of friends in class. In fact, before the first week of school was out, we got reports that she was already the new “mayor” of the school. Easily recognizable as the only kid with a bright pink walker, leg braces, and a unique gait, kids she’d never met before called out to her by name. They stopped into her classroom to say hi to her. So many children waved to her as she navigated the halls that she lost her balance several times from waving back. Moms of kids in other classes — even in other grades — reached out to me because their kids wanted to have playdates with her. One day, her principal took me aside and said, "Look around." I did. He pointed to a tall boy pushing classroom chairs in to clear a path for Freyja’s walker. He motioned toward the girl playing with her at the kitchen set, helping her stack plates and bowls so they wouldn’t fall over. See? She belongs here, he said. And having her here benefits the other kids as much as it does her.

Despite this, her team told me at the end of the school year that they were recommending the .4 classroom for her for first grade. My heart sank. “.4” was formerly known as the “sub-sep,” or substantially separate classroom. The class is resource intensive, with a very low student to teacher ratio, designed for kids who perform at 1.5 grade levels below their own. It’s called the .4 classroom now because kids placed in it spend 40 percent of their day there, and the rest with their typical peers in a general education classroom. In my mind, it’s a more politically correct way of saying your kid doesn’t belong with everyone else all the time.

When Freyja’s case manager broke this news to me, I got very quiet. Then I got angry and walked out of the meeting. I argued against the placement. I talked about least restrictive environment (LRE). I reminded the school that I believe in inclusion and they reminded me that they do too. I learned that schools see this kind of placement as inclusive because Freyja will be included in a general education classroom 60 percent of the time. She will be in this quieter, slower environment all morning, focusing on reading, writing, and math. She will spend afternoons with her “regular” classroom participating in art, music, science, social studies, Spanish, lunch, and recess — that is, she will when she isn’t being pulled out for PT, OT, speech and her other services.

I was still not convinced, so the teachers invited me to observe the .4 classroom. It was lovely. The kids I saw were engaged, they collaborated, they worked hard. The atmosphere was caring and supportive. I could see why this placement— and other classrooms and even entire schools that teach to a singular special need or learning disability — can be so positive. From what I’d heard and seen, it became clear to me that this type of classroom can provide special needs kids with what they need to succeed. And yet, it is not what I wanted for my child. But with no other option on the table, I felt backed into a corner. The school was kind but firm, and eventually I stopped arguing.

A dad texted me to tell me his son with autism got placed in the sub-sep too. He was so relieved. Another parent patted my shoulder and told me I should be happy!

Springtime is IEP (individualized education planning) meeting season, and the air is abuzz with chatter among special-ed parents comparing services awarded and classroom placements. Through the grapevine, I learned that a placement in the sub-sep class thrills most parents because their kids get so much individual attention with their academics. I talked to one mother who advocated for her daughter to repeat kindergarten until the school countered, recommending the .4 classroom. She was over the moon. A dad texted me to tell me his son with autism got placed in the sub-sep too. He was so relieved. Another parent patted my shoulder and told me I should be happy! Her daughter, who struggles with attention, changed so much in that classroom. And so will Freyja, she assured me. You’ll see. She lowered her voice to a whisper. It’s really like getting a private-school education for free!

I don’t necessarily see it that way. I understand that Freyja’s academic needs are significant. I do worry that she may get lost in a fast-paced classroom in our unusually high-performing school district, and that she may be increasingly frustrated by not being able to keep up with her typically developing peers as school gets more and more challenging. But I am less worried about her academic performance in terms of raw test scores than I am concerned that she will hate school because it’s too hard or because she gets singled out as a can’t-do instead of a can-do. I am concerned that being singled out will make her acutely aware of her otherness, even more than she already is. Freyja has always learned best from her peers. She mimics her friends, her sister, and her sister’s friends. I am afraid that even if she does well in that classroom, that being in such a small group will reinforce to Freyja that she will always need extra assistance or more time to do everything, and that she will always need someone else’s help to do anything.

I want Freyja to continue to be her determined, motivated, tenacious self. I want her to love being in school, to love learning, to believe that she has much to offer others as they have to offer her so that they can grow up to live in the real world, together. My typically developing daughter once referred to the kids who receive services in that classroom as the “borrowed” kids, because they get borrowed from their regular classroom by special ed teachers and therapists and are never in the gen ed classroom for any length of time.

Hearing this out of the mouth of my own child reinforces to me that the otherness of the .4 classroom is real, and that having a place for those kids in the school is not only not inclusion, it is segregation. I don’t believe that my child — or any child with a disability — belongs in that classroom, the one down the hall, hidden away from everyone else, invisible, because that is not the place I envision for my child — or any child — in the world.

It is on us to find a way to educate children with disabilities alongside their typical peers. Maybe that won’t happen for Freyja in first grade or ever. It nags at me that I have compromised, that I did not fight hard enough to protect what I know about my own kid. But maybe I am wrong. And if nothing else, I am hopeful that she can leverage that tenacity to grow up elbowing her way back in, ensuring her own place in the world and paving the way for the next child.

More Like This
14 Recipes For Sick Kids When Everyone's Tired Of Canned Soup & Crackers
A Parent’s Guide To Stomach Pain In Kids
30 Messages To Write In A Valentine's Day Card For Your Child
13 Is "Too Early" For Kids To Be On Social Media, Surgeon General Cautions
What Parents Are Talking About — Delivered Straight To Your Inbox