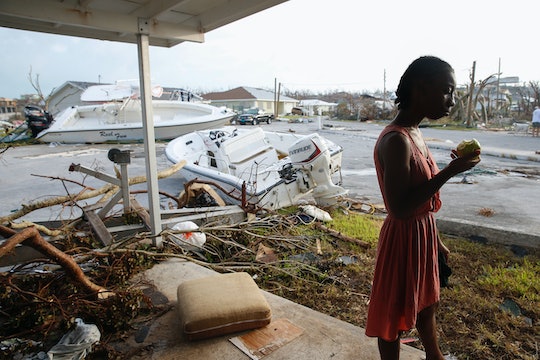 Hurricane Dorian continues to rage off the coast of Canada in the north Atlantic ocean. It has skimmed along the eastern edge of North America, leaving devastation in its path. But none have suffered quite so terribly as the people of the Bahamas. The tropical paradise and haven for tourists has seen 50 people lose their lives, though the number is expected to rise, and countless others displaced without any form of shelter. It will take years to restore these communities, and thousands of people have been evacuated from the island for safety reasons. Unfortunately, it seems Bahamians affected by Hurricane Dorian reportedly won't get temporary protected status in the United States.

On Tuesday, Sept. 10, a Trump administration official reportedly told CNN that the U.S. government would not be granting temporary protected status to the 1,500 Bahamians who have come to the United States seeking refuge after losing their homes in the massive storm. Temporary protected status is granted to people who would face insurmountable difficulties if they were to stay in their home countries, like natural disasters or warfare.

The Trump administration will only be granting temporary protected status to people who are already in the United States at the time of designation, Axios reported. This decision is slightly unusual considering the United States has a history of offering help to other countries suffering from natural emergencies in the past. For example, according to CNBC, Homeland Security granted temporary protected status to the citizens of Haiti after an earthquake hit the small island nation in 2010.

President Donald Trump explained on Monday that his administration would be "very careful" about allowing Bahamian people into the country during a press conference in North Carolina. "We have to be very careful," he said, according to ABC News. "Everyone needs totally proper documentation...I don't want to allow people who weren't supposed to be in the Bahamas to come into the United States, including some very bad people."

Romper's request for further comment from the Trump administration regarding the decision was not immediately returned.

It should be noted that Trump initially said on Monday his administration would consider granting temporary protective status to displaced Bahamians, but made it clear he didn't want, per HuffPost, "some very bad gang members and some very, very bad drug dealers," although he did not provide any evidence that these people were trying to make their way into the United States.

Not every politician appears to agree with Trump's decision. Democratic presidential candidate Elizabeth Warren, for example, tweeted on Wednesday that she thought the decision was "racist and cruel."

The effects of the Trump administration's decision are already being felt by Bahamians. On Sunday, displaced islanders traveling by ferry from Freeport, Bahamas to Florida were told they needed travel visas to enter the United States as well as passports. People who didn't have these items (perhaps because their homes had been destroyed) were told they were not allowed to enter the United States and many people were taken off the ferry, according to WSVN reporter Brian Entin.

It's a difficult time for the people of the Bahamas, and it doesn't look as though it's going to get much easier.