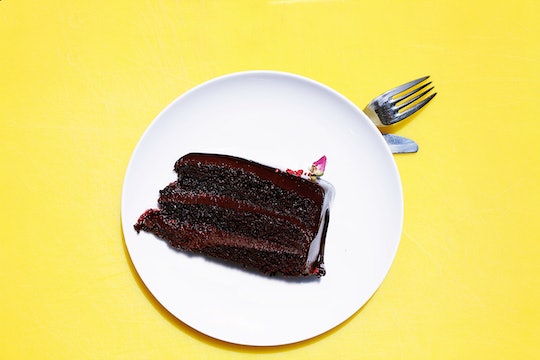 Bakeries are ceaselessly amazing to me. I remember there was a time when colored frosting seemed like the height of sophistication, and now look at our options. My sons were all about the specialty cakes, and I remember once dying my hands blue for a week trying to create a shark-themed birthday cake for one of them. The artistry that goes into those cakes... amazing. Bakers and cake decorators are like alchemists and painters all rolled into one, only with stuff we get to eat. What's not to love? Well, one bakery is facing backlash over a transgender Ken doll cake, and, personally, I can't believe it, because It. Is. Awesome.

Marlene Goetzeler of Freeport Bakery in Sacramento, California, was especially proud of one of her bakery's recent creations — a lavish cake featuring a Ken doll in a gown made of intricate buttercream swirls and a tiara. She naturally shared a picture of the cake on the bakery's Facebook page, perhaps secretly waiting for the accolades to rush in. Except... not so much. Goetzeler told The New York Daily News that the bakery's Facebook page was suddenly inundated with negative comments about the cake, who some felt represented a transgender version of the popular Ken doll.

“I really didn’t think it was going to have blowback — call me naive. Now that I see that there’s blowback it makes me even stand firmer in being able to support people.”

Goetzeler had to delete a thread on the bakery's Facebook page called the "LGBT Debate" due to inflammatory comments, and noticed a sudden drop in the amount of "Likes" on the page. “I started getting some negative comments, and a couple of days later I noticed that there was a big [jump] in unlikes, and so I was kind of surprised."

According to The Huffington Post, one person commented (though the negative comments have since been deleted):

I will never call you for another cake again. I am throwing your cards in the garbage.

You can dress up a plastic doll but sorry to burst your bubble. A person's DNA determines their sex.

One of the partygoers who got to eat the fabulous Ken doll cake, Chad Graham, told Fox 40 News he didn't understand the fuss. "I thought it was fantastic." he said, calling the backlash, "ridiculous."

Despite some of the initial backlash, fans of Freeport Bakery have been quick to show their support on Facebook. Facebook user Christopher Cordova commented:

Fabulous cake!!!! Beautiful job on Ken's gown. Keep up the great work and never back down to hate.

While Facebook user Lori McDermott noted, "It's an awesome cake and I came to LIKE your page because of it! You ROCK!"

Freeport Bakery responded with their thanks, and a beautiful quote from Audrey Hepburn we would all do well to remember:

Thank you all so much for the support with Ken.

"The best thing to hold onto in life is each other." Audrey Hepburn