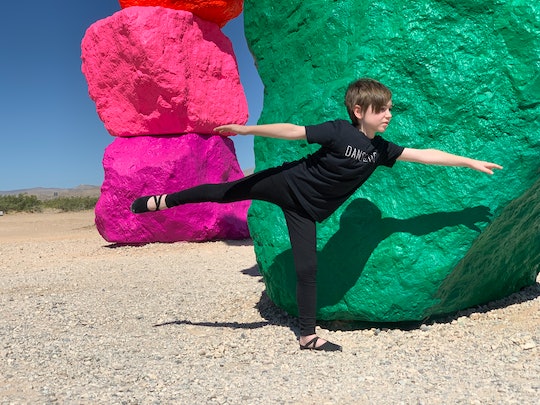 How Boys In Ballet Have Worked To Bust The Stigma

Thurston Day is an 8-year-old who has been studying ballet since he was 6. A bit over a year ago, he came home saying he wanted to quit. “Girls in his class started to tease him, saying that ‘ballet is for girls,’” explains his mother Kelly, who contacted the principal about the incident.

In response, the school had the Pittsburgh Ballet Theatre conduct a ballet class one day in place of gym. “They brought a male instructor, and all the boys in Thurston's class were also participating,” says Kelly. That episode shattered the stigma around ballet at the school, and Thurston has been supported by his peers in the time since. Kelly has also spoken about ballet at the school’s morning assembly to further normalize the idea of boys taking ballet.

Efforts like these are necessary to create a supportive environment for young dancers, say those who have spent years in that space. Tracy Inman, co-director at The Ailey School in New York City, where he launched Ailey Athletic Boys, is likewise working to educate the greater public about ballet. “The rigorous training it takes to become a professional dancer is beyond the comprehension of those with limited exposure, interest, or understanding,” he tells Romper. “Many of the negative and dismissive ideas about dance as an athletic activity are perpetuated by society and their perception of the quintessential sports figure.”

He would explain to us how in class he felt ‘free’ and liked having goals to work towards.

Dancers have recently found themselves on the offensive after Good Morning America host Lara Spencer made a sarcastic comment about Prince George’s participation in ballet class at his school. The hashtag #BoysDanceToo sprung up on Twitter, and a crowd of dancers rehearsed outside the Good Morning America studio in midtown Manhattan on August 26, as Out reported. Ballet through the centuries has always featured male dancers in lead roles, with well-loved productions like Don Quixote or The Nutcracker showcasing a danseur's skill, so the stigma is relatively new: in the mid-1800’s male dancers began to experience shame from general society as different gender ideals emerged.

But in taking boys out of dance, we have lost something. Inman notes that dance builds cardiovascular health, develops flexibility and coordination, and supports strong posture and skeletal health. Aside from bumping up against rigid cultural stereotypes, there are no pitfalls to children like Thurston pursuing their ballet goals. The sport is wholly beneficial to children of any gender.

Thurston has expressed as much to his parents. “He would explain to us how in class he felt ‘free’ and liked having goals to work towards,” says Kelly. “I think young kids crave organization and a moment of calm. Ballet has been a tremendous benefit to my son. He tells me that it is like meditation for him, yet it gives him goals to work towards and he sees progress after each class.”

Even though there is a stigma around men in ballet, and growing up doing what I loved was hard, it was worth it.

Kurtis Sprowls is a Corps de Ballet and faculty member at at Pittsburgh Ballet Theatre, where Thurston is a student, and grew up in a small town where he was the only dancer for miles. “Ballet was viewed by most as a delicate, feminine art form,” he tells Romper.

His friend and fellow Corps and faculty member Jonathan Breight echoes these thoughts. “As a male in the ballet world, you are already outside the box of ‘normality,’” he says, citing the lack of arts in education as contributing to the stigma around dance.

Both dancers note that their company is working hard to combat outside criticism by exposing the community at large to ballet. Male teachers for students as young as 2 normalize the role, and a substantial scholarship program make the classes accessible for a larger section of students. Events such as programs at public libraries in the city also increase exposure to ballet. Neither regret choosing a path that was viewed negatively by some. “Even though there is a stigma around men in ballet, and growing up doing what I loved was hard, it was worth it. It gets better. You find a group of like-minded people who love that you dance,” says Sprowls.

Since the beginning, Thurston’s dad and siblings have been supportive of his passion. The family has quashed any negativity, and works to build him up. “Nobody owns ballet as their own and the sentiment should be that,” says Thurston’s mom Kelly. “Why can’t I buy male ballet clothes at Target? They have a ballet section but it’s in the girls area. We have a lot of work to do, but people are listening and the sentiment is moving forward.”

This fall, Thurston will be participating in The Nutcracker at The Benedum Center, a major theatre in Pittsburgh’s Cultural District. His classmates are so excited to support him and watch the show, and the Days are proud to see him in the spotlight.

Editor's note: A previous version of this article misidentified Tracy Inman, who is the co-director of The Alvin School. It has been updated.