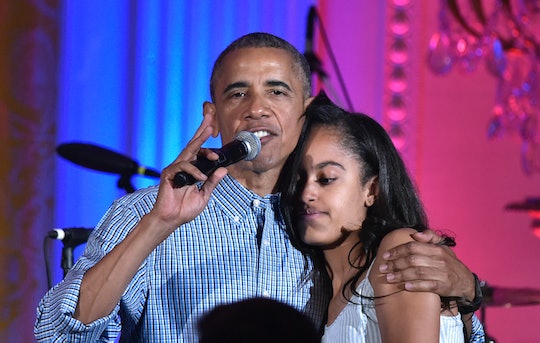 Saying goodbye to your child as they start college is emotional for any parent. It's the end of something you never really thought would end, and the beginning of something that doesn't really include you. Not on the same level, at any rate. So when Barack Obama cried while dropping Malia off at college, I respected that moment. Regardless of the fact that he was the President of the United States for eight years, he could still be struck by this momentous change in the life of his daughter. Because regardless of his political title, let's face it: Barack Obama is still such a dad.

More Like This
Obama Said The Sweetest Thing About His “Friend” & Family Dog Bo
Wait, Did The Government Actually Do Something For Parents?
The Obamas’ New Family Rule? Get Vaccinated If You Want To Hang Out With Us
If Your Kid Can’t Get Enough Dinosaurs, They’ll Love These 20 Shows

Malia Obama entered her undegraduate studies at Harvard this fall, after taking a gap year to see the world. During that year, the president's oldest daughter reportedly visited Bolivia and Peru with a Boulder, Colorado, company called Where There Be Dragons, and she interned at the Weinstein film company, according to the Chicago Tribune. While the president and his wife Michelle have had some time to grow accustomed to their 19-year-old daughter's absence, it seems as though the actual moment of dropping her off at college made for a surprisingly emotional goodbye.

Speaking at an event for the Beau Biden Foundation for the Protection of Children in Delaware on Monday, Obama opened up about how hard that moment truly was for him, according to CNN:

For those of us who have daughters, it just happens fast. I dropped off Malia at college, and I was saying to Joe and Jill (Biden) that it was a little bit like open-heart surgery.

While he was obviously struggling to say goodbye to his daughter, Obama said he tried to hold it together in front of her (he didn't want to lose his street cred in front of the secret service guys, after all), according to CNN:

I was proud that I did not cry in front of her but on the way back, the secret service was looking straight ahead pretending they weren’t hearing me as I sniffled and blew my nose. It was rough.

Such a classic dad move, right? He's probably thinking back to those times when he pushed her on the swings when she was a little girl. Cue the soft music.

While he might have been feeling sad in the moment, saying goodbye to his little girl, he did see it as a moment to reflect on what truly matters in our lives, according to USA Today:

And it's a reminder that at the end of our lives, whatever else we've accomplished, the thing that we'll remember are the joys that our children, and hopefully way later, our grandchildren bring.

The Obamas can take comfort in the knowledge that they still have their youngest daughter, 16-year-old Sasha, at home with them for a few more years before she heads off herself. They should also take comfort, and no small amount of pride, in the way they raised their daughters. During a Q&A period with Bill and Melinda Gates last week, Obama talked about the key pieces of advice he has offered his daughters time and again throughout their lives. He and his wife have tried to encourage their daughters to be kind, empathetic, considerate, and hardworking. The Obamas have raised their daughters to rise to the challenge of responsibility, to embrace their own individuality and apply that uniqueness to make a difference in the world, and to be persistent, according to People. Because "change takes time."

Now here is a little piece of advice for Obama; change isn't always easy, and neither is letting go. Cry it out — most people, but especially parents, won't judge.