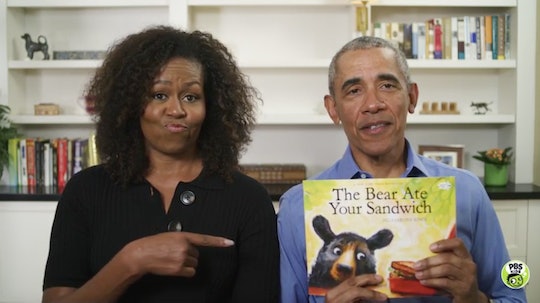 We might still be in quarantine, but your Monday is about to get a bit more joyful after President Barack Obama joined Michelle's story time on PBS Kids today. On May 18, the Obamas read The Bear Ate Your Sandwich, a popular kids' book written and illustrated by Julia Sarcone-Roach, as a part of Mondays with Michelle Obama, and it was as wonderful as ever.

"This is a book about a bear, lost and hungry in the city, who happened upon a girl's sandwich and ate it. Or did he?" the former first lady says before they begin their reading, which included President Obama making some adorable "ruff" sounds.

This isn't the first time the Obamas — who have long been proponents of literacy for children, holding story times at the White House and giving powerful speeches on the importance of education — have read children's books together recently. Last week, in fact, they read The Word Collector for the Chicago Public Library to "give all you parents a break today," as they shared on Twitter.

Next week's edition of Mondays with Michelle Obama will also feature some more special Obama family guests. Their adorable pups Sunny and Bo, both Portuguese water dogs, will be dropping by to say "hi" next week and to help the former first lady read Can I Be Your Dog? written and illustrated by Troy Cummings.

Mondays with Michelle Obama began back in April as a part of Penguin Random House's literacy initiative "Read Together, Be Together," and PBS Kids' "Read-Along" effort on Facebook and YouTube to help to "give parents and caretakers a much-needed break." And good news, it's since been extended to May 25.

The story time videos are live streamed simultaneously at 12 p.m. ET on the scheduled Mondays over the PBS Kids Facebook page and the PBS Kids YouTube channel, as well as on Penguin Random House’s Facebook page. They can also be played in their entirety on all of those platforms once the live streams are over, so no need to stress if you couldn't catch it live or just want to watch a a certain story again and again.

More Like This
Anthony Anderson Thanked His Son For Inspiring Him To Finish His College Degree
Fun Ways To Celebrate National School Nurse Day
You're Going To Laugh So Hard At These Graduation Memes
From Captions To Gifts, These Are All The Kindergarten Graduation Ideas You Need