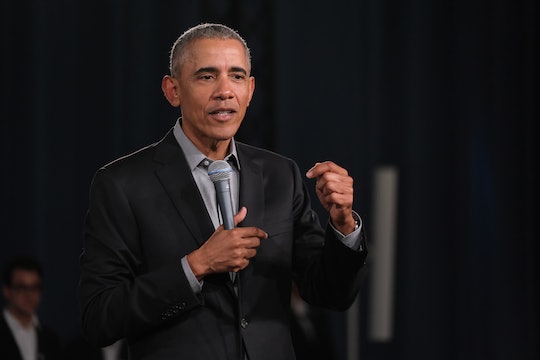 Barack Obama Playing Football With Kids Will Bring On The Tears

If there was such a thing as a president for kids it would be Barack Obama forever and ever. Not just because kids always seem to be truly drawn to his humor and charisma but because he clearly enjoys hanging out with them as well. Arguably more than he likes hanging out with grown-ups, not that I can blame him. While the 44th President of the United States has been keeping something of a low profile since he left office, he's not above a good old surprise appearance. Like when Obama played football with kids at a recent after school event and shocked them all. Not only did they look like they were having a great time, so did he. And boy does it make me wish he was president again there I said it.

The former president stopped in to play a little baseball and a little football with kids at the Washington Nationals Youth Baseball Academy on Wednesday. The organization aims to "use the sports of baseball and softball as vehicles to foster positive character development, academic achievement, and improved health among youth from underserved communities in Washington, D.C.," as per the mission statement. The concept of using sport to foster a healthier, balanced lifestyle is of course in line with Michelle Obama's Let's Move initiative to reduce childhood obesity, but it's also a great opportunity for Obama to show his support and play ball with some kids.

Obama didn't just pop in for a minute or two for a fun photo-op either; instead, he actually played baseball with the kids (hitting a double which was decently impressive), threw a touchdown, visited the weekly Farmer's Market... and even stuck around to offer a great little pep talk you know those excited kids are going to remember for years to come. As Pop Sugar noted, Obama gathered the kids in a huddle around him and congratulated them for a job well done:

It seems both Michelle and Barack Obama are using their exit from the White House (I don't want to talk about it) to focus on issues that are really close to their hearts, and the big one seems to be healthy kids. It was recently announced that the couple are slated to produce an upcoming kids' show teaching healthy eating habits called Listen To Your Vegetables And Eat Your Parents, as per Eater.

I mean, I'm really happy the kids are getting all of the Obama attention these days and everything. But all of us adults out here could use some surprise visits too. I promise to eat healthy and everything if this will make it happen, okay?