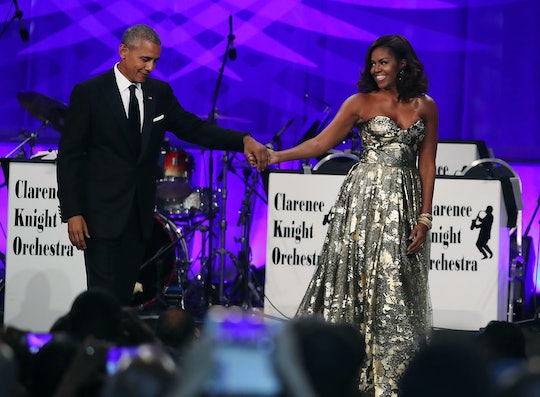 Barack Obama's Birthday Message To Michelle Will Melt Your Heart

I'm not gonna lie to you, internet friends. I thought love died in 2018 when Channing Tatum and Jenna Dewan split. I mean, if those two couldn't make it, how was I supposed to make it work with some rando from Bumble? It seemed true love didn't have a chance in this world, and although the marriages of powerhouse couples like Harry and Meghan and Nick and Priyanka did stir some brief feelings of optimism in my cynical heart, I couldn't listen to Ari's "Pete Davidson" without feeling hopeless. But then Barack Obama's birthday message to Michelle showed me love is making a comeback in 2019, and I'm here to spread the good tidings.

It's true: love is alive and well, and it's all because of President Obama's most recent Instagram post celebrating Michelle's 55th birthday. The former first couple have made many a sweet social media post for one another in their day, so it shouldn't come as a shock that the former POTUS would take to Instagram for his wife's special day. The post was a sweet throwback picture of the two in the early days of their relationship, and it's clear their love is as pure and powerful today as it was all those years ago from Obama's sweet caption.

First of all, they both haven't aged a day, and secondly, if their preciousness doesn't restore your faith in love, I don't know what will. Seriously though, the Obamas relationship is pretty powerful to witness, especially for younger people who grew up in a world where 50 percent of marriages ended in divorce and constant splits happened in the public eye. Happy, scandal-free couples are rare in politics — a look at History's list of the most notorious political scandals in United States history show that three of the five on the list involve issues with a president's marriage — and the Obamas have given the American people a decade of witnessing their blissful marriage.

From supporting him as he handled the presidency to cheering her on as she rocks her book tour for Becoming (which hit $3 million in sales in December according to the Washington Post), the Obamas are there for each other always, and they let the American people be part of their love too. So naturally social media users were quick to celebrate both the post and the first lady after the former president posted the pic of his one of a kind, and honestly the tweets Obama's photo inspired were almost as good as the post itself.

Basically, the internet is in agreement that those two are absolute goals, and they are officially the standard to which we should all hold future romantic partners from this day forth. (Even if it does mean you have to be a little choosier next time you hop on a dating app.) So if you take anything away from the former president's ode to his wife, make it this: love is alive, but you gotta find someone who treats you the way you deserve to be treated. Happy birthday, Michelle!