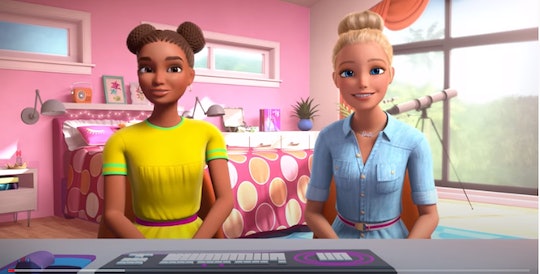 Once upon a time, Barbie may have been best known for her golden blonde hair, pink dream house, or her love interest with Ken. But these days, everyone's favorite doll is going viral for tackling difficult, but incredible important issues. This week, a video featuring Barbie discussing racism and white privilege honestly with her friend has been seen by millions of people on social media.

As part of Barbie's regular vlog series on YouTube where she chats with her friends about life and the world in general, the Mattel doll recently sat down for an important conversation with her friend Nikki, a Black doll, about systemic racism and the importance of acknowledging white privilege.

"People, millions of people, across the world are standing up to fight against racism, and they're doing this because too often and for such a long time, people have been treated unfairly, and in some cases even hurt by others, because of the color of their skin," Barbie explains at the beginning of the video.

"It's a tough conversation but I'm glad we're having it," Nikki interjects. "People might think that my life looks fine, but the truth is that I and so many other Black people have to deal with racism all the time."

Nikki goes on to provide examples of racism she's experienced: Being stopped by security in a situation where Barbie was left alone and then told she had gotten "lucky" when she did well on a test.

Throughout their conversation, Barbie listened to her friend, defended her, and went on to point out in simple terms that people "don't make those assumptions about white people, like me." As Barbie put it, "That means that white people get an advantage that they didn't earn, and Black people get a disadvantage they don't deserve."

Justifiably, the video has been applauded on social media. As one person pointed out on Twitter, "Why is Barbie facilitating better DEI (diversity, equity, and inclusion) trainings than many organizations?"

The fact that a Barbie vlog was giving better advice on dealing with racism than some workplaces was pointed out by several people, in fact. "Light years better than the one my workplace used this year," one person tweeted about the vlog. "I must also confess, I had no idea Barbie had evolved. Last time I paid her any heed was in the fifties."

Another noted that times have changed for the better for kids. "I grew up with cartoons that would never dare say an ethnicity or someone's race and now kids get this? These generations are going to be so aware and it's amazing."

"Wow, this is legitimately better than any show I had as a kid and I am genuinely impressed. Would gladly show something like this to my kids in the [future] if/when i have some," another chimed in.

Barbie's YouTube channel has loads of sing-a-longs for kids to enjoy, but there are also videos that address important issues like mental health, how to use your voice, and systemic racism interspersed throughout. And it sounds like Mattel will continue to put out thoughtful content. "Together, let’s keep listening, keep learning, and take action to inspire change," the official Barbie Twitter account wrote, along with a helpful resource for parents to use with their kids to combat racism.