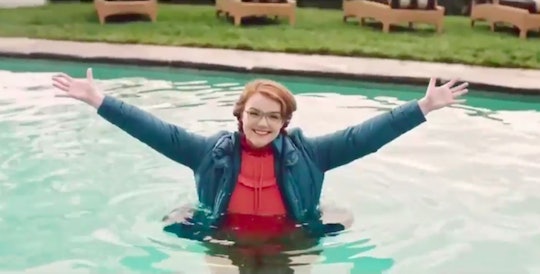 Barb Is At The Golden Globes, This Is Not A Drill

Midway through host Jimmy Fallon's song-and-dance number, the mysteriously departed character from the hit Netflix show reemerged from her watery grave. And not just for a second, but in total glory with a synchronized swimming performance fit for the Tokyo Olympics in 2020.

It was a moment among several ah-mazing moments for fans of Stranger Things. Now, the new debate isn't whether Barb is alive, but whether her resurrection or Millie Bobby Brown's rap was better. (To be fair, both events top most things that happened in all of 2016.)

Despite the glory of the moment, the appearance of Shannon Purser, the actress who portrayed Barb, doesn't actually mean she will return for the second season of Stranger Things. The show's co-creator Matt Duffer basically squashed hopes that Barb was actually alive when speaking to IGN last summer:

I can’t see it happening. But Barb will not be forgotten. We’ll make sure there’s some justice for Barb. People get very frustrated, understandably, that the town doesn’t seem to be really dealing with Barb. That stuff is all happening. We’re just not spending any screen time on it.

At least we'll always have her fan-fic revival, courtesy of Jimmy Fallon.

Even though the chances are slim-to-none that Purser herself will go back to hanging out with (and shading the decisions of) Nancy in the land of Stranger Things, the actress is fine with her fate. Speaking to The Guardian about what was actually her first professional acting job, Purser said she was blown away by the reaction to her character:

When the show premiered, I told myself: "Well, that’ll look good on my résumé." But within a week, I’d gathered thousands of followers on Twitter and Instagram. People all over the world were messaging me, asking: "What happened to Barb?" People related to her personally, so they got mad. It was sweet.

Besides, Purser is keeping quite busy. She is next due to appear in Riverdale, a series on The CW based on the characters in Archie Comics. She recently also filmed upcoming movies Life of the Party — with none other than Melissa McCarthy — and Wish Upon.

So, although Barb may be gone for good from Stranger Things, neither she nor Purser herself will soon be forgotten.