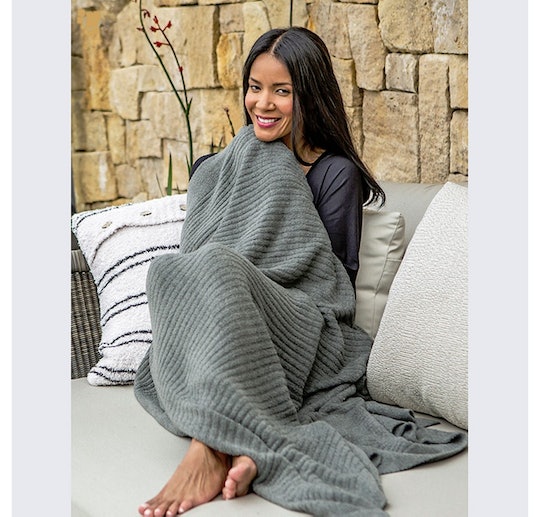 Chrissy Teigen Says This Blanket Is The Best & Honestly, I'm Inclined To Believe Her

Everyone has those people for whom finding the right gift feels on par with the quest for the Holy Grail. Those people can't accept wine (they don't drink) or chocolate (they're diabetic) or books (they prefer Netflix), but you know what every human enjoys? Being cozy. Which is why this Chrissy Teigen-approved Barefoot Dreams Blanket may be the solution.

Teigen was recently singing the praises of Barefoot Dreams on Twitter. (She was later accused of being paid for an ad, which she was not. She was simply sharing that she really digs this blankie and it would make a nice gift.) She says she loves these throws because they "stretch" and she can wrap herself in one head-to-toe. Which she proclaims to do every day of the year.

Teigen is something of a blanket enthusiast, it seems, as she previously (and rather hilariously) posted that she was seeking to hire someone to lift her weighted blanket onto her body. Clearly, she is someone who has done her research on comfortable textiles to drape upon one's person. Which makes me inclined to believe that Barefoot Dreams is in fact a top notch cuddle product.

Taking a look at the Barefoot Dreams site, there are quite a few options to choose from. There are throws, beach blankets, and even wearable blankies, for when you want a Snuggie, but a fancy, chic Snuggie that is called a "wearable throw" and comes in colors like "graphite" and "striped stone." (They also offer some Disney-themed blankets, FYI.)

Personally, I think if I were going to give one as a gift, I'd give the CozyChic Throw, which apparently was one of Oprah's favorite things way back in 2004. It's huge (54x72) and comes in a variety of solid, neutral shades. It says it's made from a fluffy polyester microfiber, but looks so soft it looks like it's created from a herd of virgin lambs resting atop cumulus clouds. It's also machine washable, which, if you're like Teigen and plan to drag it around with you like Linus for 365 days a year, is a definite plus.

Take note: this blankie ain't cheap. The CozyChic is $147 on the Barefoot Dreams site. But if you're OK with a light safari-theme, you can score one on Amazon for $136. Amazon also has a nice Barefoot Dreams "heathered waffle throw" for $119.

Yes, that might sound like a lot for a blanket. You may be like "Dude, Target has a queen-size microplush fleece blanket on sale for $18.89 today." Which is true. But you can't give that blanket to your mother-in-law and say, "Chrissy Teigen says it's awesome!" I mean, you can. But you'll be a liar. (Though who are we kidding — your mother-in-law probably has no idea who Chrissy Teigen is anyway.)

I do think the marketing team over at Barefoot Dreams is on top of their game. They found a way to make blankets look aspirational. Like, if I get one of these blankets and wrap myself in it, I will suddenly find myself standing on a beach with attractively windblown hair, staring at a distant lighthouse. I totally won't be curled up on my stained Macy's couch. Which is broken, because my son has jumped on it so many times the springs have given out, and which now sadly sags as proof that we are failure parents who couldn't get their kid to stop jumping on the sofa. No, if I get one of these blankets, I'll be carried away on barefoot dreams... no Netflix required.