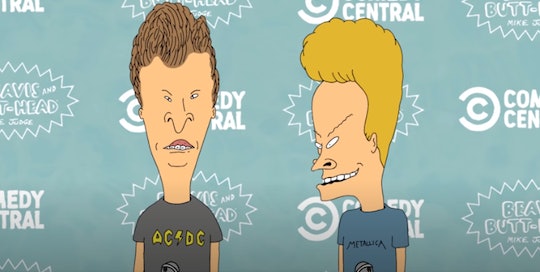 I'm going to go out on a limb here and say there probably isn't a single Gen X'er who grew up with access to TV in North America who doesn't remember two stoner dudes with irritating laughs, And guess what? Beavis and Butt-Head is coming back to TV and this time they're going to be dads.

For those of you who might be new to the show, Beavis and Butt-Head featured the two pals offering their opinions and thoughts on pop culture from Texas. They also had really distinctive matching laughs that truly every Gen X guy tried to perfect in high school. Mike Judge, the creator of the original MTV adult cartoon that ran from 1993 to 1997 on MTV (and once featured Cher, never forget that Cher once sang "I Got You Babe" with Beavis and Butt-Head) is bringing it all back to Comedy Central, the network announced earlier this month.

Why has Judge — who is coming back as writer, producer, and voice actor for both main characters — decided to bring it all back? As he explained to Variety, "It seemed like the time was right to get stupid again." Fair enough.

Not only is it time to get stupid again, it's time to show these aging Gen X'ers learning how to deal with their Gen Z kids because somehow Beavis and Butt-Head became dads.

"In this new iteration, 'Beavis' and 'Butt-head' are entering a whole new Gen Z world. Comedy Central has ordered two seasons of the new series with meta-themes relatable to both new and old fans — Gen X parents and their Gen Z kids," Comedy Central said in a press release.

Fans of the original show are actually pretty excited to see the two couch potatoes become dads. One social media user tweeted, "So Beavis and Butthead [sic] are going to be parents in the new series. They finally scored," while another was just curious, "What will their kids be named?"

No news yet when new episodes of Beavis and Butt-Head will appear on Comedy Central, but there will certainly be an audience for it whenever it happens.

More Like This
The Office Halloween Episodes: A Definitive Ranking
The Best Movies Airing On Freeform’s 31 Nights Of Halloween In 2022
All The Nights Hocus Pocus Airs On TV In October 2022
10 Kid-Friendly Halloween Episodes From TV Shows Your Little Vampire Already Loves