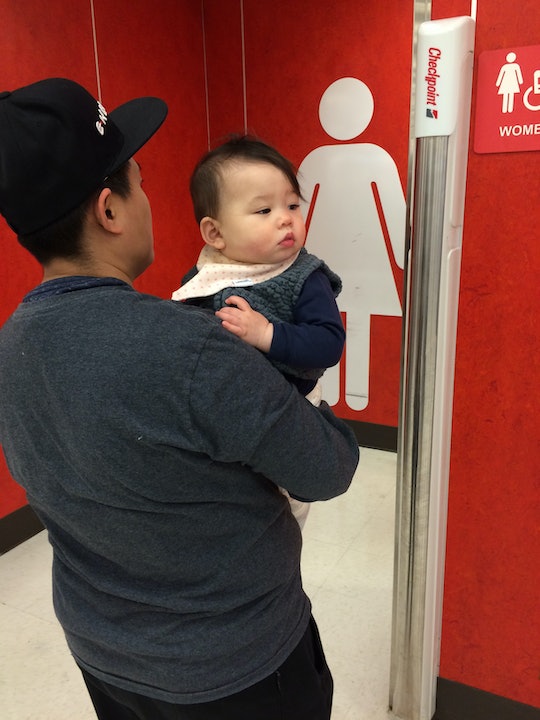 Because Of Transgender Bathroom Laws, I'm Afraid To Take My Daughter To The Restroom

Have you ever looked at someone — perhaps they dress too young for their age or they've in some way exhibited qualities not usually associated with being a mom —and thought, Huh. That's someone's mother? I do not fit the conventional image of motherhood, but I am someone's mother — a darling, perfect, beautiful, funny, full-of-personality, amazing little girl's mother. But to be honest, to many I probably look like someone's father, and because of dangerous transgender bathroom laws, the way I look has put not just my own safety on the line, but also my daughter's. I wear men's pants because I like the big pockets. I wear comfy clothes because, who doesn't want to be comfortable? I wear snapbacks because I can rock the hell out of them. And, yet, I'm someone's mother. And even at 8 months, that someone exhibits a perseverance and strength that I know she will undoubtedly need being a child with two moms.

Which is why this horrific transgender bathroom legislation in North Carolina and Alabama, as well as the Target hate backlash from groups like the American Family Association (AFA), scares the hell out of me. Even scarier? When I read that AFA supporters are supposedly "testing" the Target trans-friendly restroom policy by sending men into women's restrooms to stand guard against all the "perverts," or when I see a video of a zealot proudly marching through a Target with her bible while yelling,

Though I am a huge advocate for the transgender community and feel immense anger on their behalf, as someone who identifies as a woman but to everyone else likely looks like a man, I also shudder to think how the opposition would treat me if I walked into a woman's bathroom. Worse, what if I happened to have my daughter with me? Would they jump to conclusions and accuse me of being a child molester? How would they prove their misguided accusations? How would I? Would they demand to see my genitals? Would they make enough of a scene to both embarrass and anger me, as well as frighten my child?

I felt humiliated and ashamed that I was something that would later need to be explained in either quick whispers at the watercooler or, worse, over email.

Even before this legislation, I've long avoided public restrooms. In the past I've been shoved in a men's restroom, and I've been told by a young woman that she was going to "go get her boyfriend" after finding me washing my hands at the sink. I've been asked more times than I can remember if the bathroom a woman just walked into was, in fact, the women's restroom because they were so "confused" to see me standing inside it. Once at a temp job, a colleague of my supervisor came by and offered to show me where the men's restroom was — in front of my boss. That was super uncomfortable for everyone, especially me. It's hard enough starting a new job, but when your new colleagues can't get your gender right, it doesn't exactly make you feel welcome. Instead of being angry or frustrated over his mistake, though, I felt humiliated and ashamed that I was something that would later need to be explained in either quick whispers at the water cooler or, worse, over email.

In fact, it's only been within the last couple of years that my feelings have finally started to shift from embarrassment about who I am to anger over how ignorant others are. When you are constantly faced with blatant ignorance, stupidity, and/or aggression, it can wear on even the strongest people. But I've realized I can't control and consequently be worried about what others think. They may be limited by their own ideas of gender, but it doesn't need to limit me. Still, it's hard to undo years of negative reinforcement, hard to teach my stomach not to drop whenever I'm standing at a sink and the door opens because I'm afraid for what encounter might ensue.

My safety is important, but my daughter's is non-negotiable. How am I supposed to keep her safe if the very legislation that promotes ignorant discrimination and encourages hate-based fear-mongering prevents me from doing just that?

So in an effort to lessen my stress and limit potential for unnecessary conflict, I try not to use public restrooms unless I absolutely have to, and even then I never make eye contact, because at this point I can quickly identify the confusion in someone's gaze even before open their mouth. In order to protect myself, I'm in and out before anyone can ask "what" I am.

Even though I can't see these types of disgusting laws making their way to New York City, where I live, I was shoved into a men's restroom here, in this very liberal metropolis. So what if it happens again — only this time I have my daughter with me? I can vote and work to make sure that, at least in New York City, this discrimination isn't made into law, but I cannot guarantee other constituents feel the same as I do. Hatred and intolerance exist everywhere, and legislation like this just makes it seem all the more valid. It gives bigots a platform to stand and say, "See, it must be wrong because it was made illegal."

Why would any parent want to teach their children that only certain people are guaranteed basic human rights, like access to a public restroom?

Just the other day during my commute home an irate stranger, mad because I squeezed onto the subway car, went for the low-hanging fruit and attacked my appearance, accusing me of "wanting to be a man" before subsequently threatening me with violence. On a separate occasion I had to spend an entire cab ride home explaining to a cab driver why it was none of his business how it came to be that two women were able to make a baby.

As a butch lesbian, ignorance and hatred are something I have to deal with regularly, but as a mom, it's something I have to worry about every day. My safety is important, but my daughter's is non-negotiable. How am I supposed to keep her safe if the very legislation that promotes ignorant discrimination and encourages hate-based fear-mongering prevents me from doing just that? It won't be long before we're working on potty training with her. Will I always need to make sure that her other mom, who is cisgender, is with us just in case our daughter has to do what we're training her to do? Right now our baby girl hates diapers and puts up a wicked fight any time we have to change her. She squirms, fusses, and even cries sometimes. What if she does this in a public restroom and someone falsely accuses me of harming her? What if they say nothing and go grab a manager, instead? Will the bathroom gestapo wait outside with the police and take my daughter from me under the guise of "protecting her" from her own mom?

Laws like these send a message to everyone everywhere that intolerance will be tolerated, and that's a message I can't afford for my daughter to hear.

As a society we're now at the point where we're actually legislating which public bathrooms people can use. There are politicians and organizations who think it's their right to dictate which private stall another person enters. That's where we are as a nation. Bathroom laws like the ones in North Carolina and Oxford, Alabama don't just affect individuals in those states, and it's naive to think they only affect the trans community. Laws like these send a message to everyone everywhere that intolerance will be tolerated, and that's a message I can't afford for my daughter to hear. Even if I wasn't gay, as a parent I do not want to raise my child in a country that says it's legal to discriminate against those who are different. Why would any parent want to teach their children that only certain people are guaranteed basic human rights, like access to a public restroom?