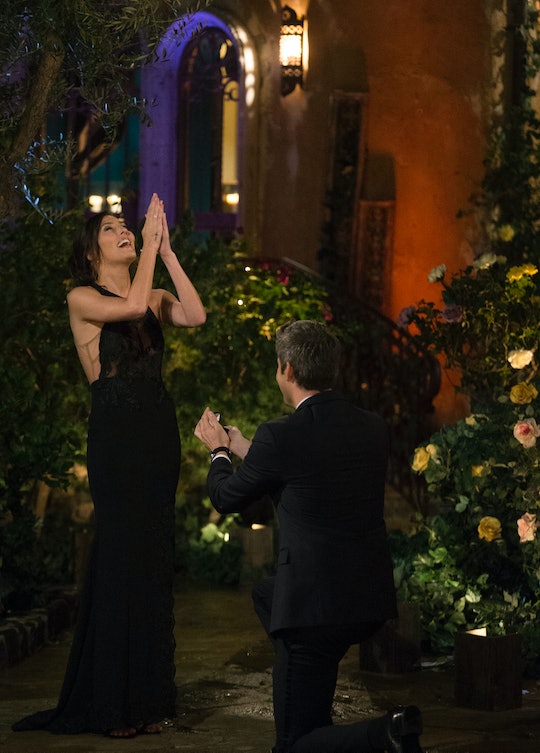 When participating in a show like The Bachelor, it's important not to take things too seriously and to try and have some fun. Season 22 contestant Becca Kufrin seems like she definitely came into the show with an open mind, and Becca’s Twitter before The Bachelor proves that the contestant has a great sense of humor that could carry her far in the competition for Arie's heart.

Becca only just signed up for her Twitter account back in December 2017, but already, she's proven to the social media world that she probably should have been tweeting and sharing her commentary on pop culture for years. I mean, her Twitter bio says, "I'm mainly here for drag queens and corgi fan accounts," and her banner is a photo of what I think is supposed to be a very cool looking Joe Biden, so can she be my new best friend already?

Obviously the majority of Becca’s tweets are about The Bachelor, but instead of being about strictly promoting the new season, they’re legit hilarious, especially coming from a contestant on the show. We’ve all toyed with creating Bachelor drinking games to make fun of the show so many of us still religiously follow, but to read Becca’s own commentary about the season premiere makes it all justified. And it also makes you want to watch for her scenes specifically.

As with any season opener, there were plenty of cringe-worthy and downright awkward moments, from the terrible puns to the "little weiner" gift Tia Booth gave Arie (right before double checking that he didn't already have one). To be fair, the women have to do something in order to stand out from the rest and short of kissing him right there on the spot, the corny intros and dad joke one-liners can end up making a lasting impression.

Being one of those who made an impact with her own introduction (she had him get down on one knee and fake propose), Becca seems to have no problem making fun of herself for it now, even though it was still pretty funny in the moment. Plus, she referenced Game of Thrones in her tweet, so that just adds to Becca’s likability factor.

Besides being able to joke about The Bachelor, Becca is also just all-around unapologetic about herself and all about making her Twitter followers laugh, much like she seems to do on Instagram. Suffice to say, she seems totally down to earth, which makes her even more of a catch for Arie in my book.

Just because she knows how to make us all laugh, it doesn't mean she’s not here for the right reasons, though. I know, those dreaded words are said too much in The Bachelor franchise, but Becca doesn't have a business to promote or a modeling career to get off the ground. In fact, in Becca’s Bachelor bio, she said that one of the things on her bucket list is to "fall in love and own a house and dog with my partner," so her priorities couldn't be any clearer. I’m still looking forward to watching her make Arie laugh this season, however, since some of the contestants might be a little more intense than others.

Based on her corny but cute introduction to Arie, I would say that Becca’s chances of making it far this season are as good as anyone else’s. Plus, we now know that she has a sense of humor to round out what seems to be a fun personality, so if Arie doesn’t propose, I’d be happy to bend the knee.