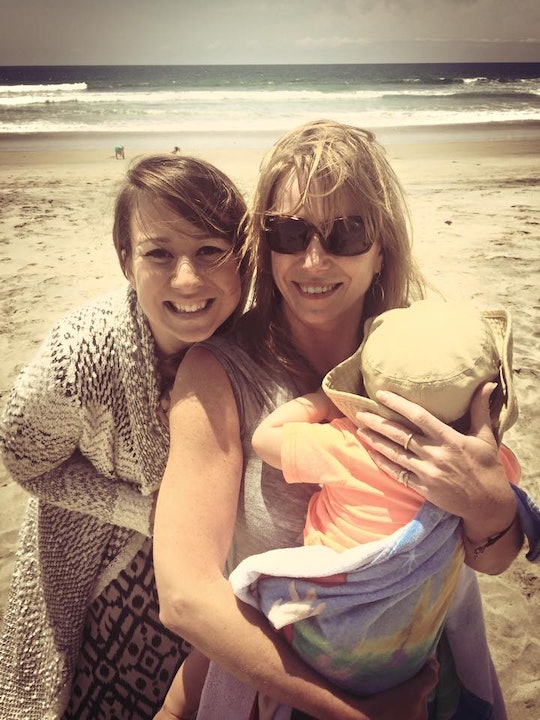 Becoming A Mom Helped Me Forgive My Own

Growing up, and until rather recently, my mother and I were close, but distant; loving, yet contentious; supportive of one another, but often times cruel towards each other. I've loved my mom through every up and down imaginable, every painful and joyful time in our shared lives, but there was always something between us; something I held onto with a stubborn, begrudging resentment. I grew up in a toxic home, plagued by domestic violence. My father was short-tempered, dangerous, and manipulative, the imperfect combination that fosters relentless abuse. I spent the majority of my childhood begging my mother to leave him, but she wouldn’t. She couldn’t. And a part of me — the small, scared adolescent part — couldn’t forgive her for that. Then, I had a child of my own, and becoming a mother helped me forgive mine. Though I knew so much would change when I became a parent, my son’s ability to make me see the world through my mother’s eyes is arguably the greatest, most beneficial change I’ve ever experienced.

For every year of my cognitive life, up until my son entered this world, I've thought that leaving my father was a no-brainer. Easy. Something my mother should have done if she cared about her children in any capacity. I grew up consistently angry at my father; after all, hating someone who beats you is easy. My mother, however, filled me with a slew of complicated emotions, all of which left me simultaneously sympathetic and cold towards her. I knew every day was difficult for her, but I couldn’t understand why she didn’t leave; I felt bad for her and defended her, yet I resented her for staying. Every time I asked her to, and every time she said she couldn’t, it made me angry. I didn’t demand better of my father; I knew far too well that he was incapable of being more than a man who hit his wife and children. But I wanted more from my mother. I was just too blind to see that she had nothing more to give.

I failed to see just how manipulative my father was, how complicated a web he had woven, and how trapped my mother truly felt within it. Every time he would hurt my mother or his children, he'd counter it with a slew of apologies and materialistic gifts. He'd promise to be a better person, promise to be the man my mom married, promised to take me to Disney World. I spent my time either hoping I wouldn’t get hurt, wishing the pain away, or looking forward to his faux regret. My mother, on the other hand, spent her time clinging to a promise that must have resonated deep in the marrow of her bones. A promise that her children would grow up in a loving home with a loving father, that they would want for nothing and be protected by both parents. That promise was paraded in front of my mother constantly, and when it was broken, my father was able to convince her that it wasn’t his fault. It was hers.

There was a time when my father held me the way my partner held our infant son and made the same promises in similar minutes-old ears and filled my mother with the same sense of unbridled, endless love. My father used those memories against her and begged her not to “tear our family apart” by leaving, all the while dismantling us from the inside out.

I failed to see how my mother’s memories shackled her to an abusive spouse. So much of my son’s labor an delivery is a blur, thanks to 10 hours of drug-free labor, an additional 12 hours of labor with a much-needed epidural, and three hours of active pushing. I was exhausted, but I vividly remember my partner holding our son in his arms for the first time. I remember him kissing his forehead and whispering in his minutes-old ears, promising to love him and cherish him and protect him forever. I knew then that my mother experienced much of the same. There was a time when my father held me the way my partner held our infant son and made the same promises in similar minutes-old ears and filled my mother with the same sense of unbridled, endless love. My father used those memories against her and begged her not to “tear our family apart” by leaving, all the while dismantling us from the inside out.

She didn’t know if she would ever free herself from her spouse, but she worked tirelessly to make sure that her children could free themselves from their father.

I failed to see how passionately and desperately my mother wanted better for her children, to the point where she was willing to sacrifice herself for what she believed, at the time, was best. It’s hard for me to adequately argue that staying in an abusive relationship “for the kids” is at all beneficial, but when you’re financially tied to an individual and they’ve convinced you you’re nothing without them, I understand why someone would, without a doubt, believe them. My mother believed it, and she endured physical, mental, and verbal abuse almost every single day for more than 20 years, all the while imploring her children to do better and be better. She wanted us to look at her and look at our father and be more than they were. She helped us in school and drove us to practices and filled out applications so that college was an option. She didn’t know if she would ever free herself from her spouse, but she worked tirelessly to make sure that her children could free themselves from their father.

I finally see all that she sacrificed now. And even though I sadly and mistakenly spent the majority of my life thinking my mother was weak, my mother was — and remains — unbelievably strong. Our society likes to talk about strength in a one-dimensional way, especially when it comes to domestic violence. You’re strong, but only if you leave. You’re strong, but only if you fight back. You're strong, but only if you fit a predetermined mold of abuse victim, so that the abuse you've suffered is somewhat understandable. Becoming a mom helped me see there's no one way to be a mother to a child, and there's no one way to do and want and find better for your children.

My son taught me that my mother was strong because of all she endured. She was hopeful — if only to a fault. My mother survived a dangerous, violent, and abusive situation, all in the hope that putting herself in harms way would save her children. She weathered the storm and persevered, until she felt safe enough, ready enough, and able enough to leave. She did what she thought was best for her kids, and I've realized that is something I could never, ever fault her for. She did the best — her best — when there was no one there to help her. And she did it alone.

Now that I’m a mother myself, and I’ve already failed more times than I'm wiling to admit, my strong, courageous, resilient mom is still there, fighting for me, supporting me, and reminding me that, just like her, all I can do is my best.