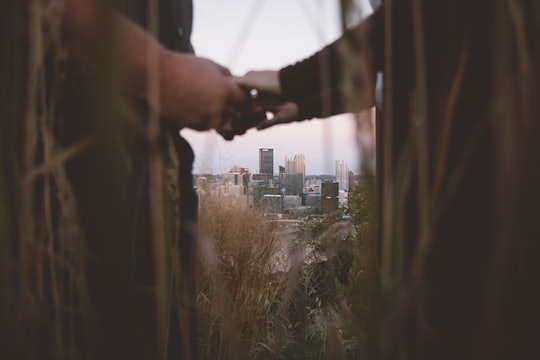 "I can't leave while you and your brother live at home." I can't tell you how many times I heard my mother fight against even the idea of a (very necessary) divorce, based on the fact that she had children. I grew up in an abusive environment, with a toxic parent who beat my mother, my brother, and myself. And while surviving an abusive childhood has made me a better parent, I can also say that I am still dealing and working through the long-term damage that comes from living in a house where two parents not only didn't love one another, but one parent was abusive to the other.

Of course, there were other reasons, other than the existence of my brother and I, why my mother — and many women like her — could not leave that volatile relationship: My mother lacked financial freedom (and financial abuse is present in over 98% of domestic violence cases); My mother was isolated from a large part of her family, and she didn't have the support system to facilitate not only herself, but her two children. It's never as easy as "just leaving" when someone is in an abusive relationship. Add to that the idea that letting go of a promise made with the best intentions (a promise that ensured you'd be part of a family), and the whole thing is nothing short of painfully difficult. In no way am I trying to suggest that someone is weak or cowardly or wrong for staying in a relationship that isn't working; every situation is so personal, and having the support and resources to walk away from someone is indeed a blessing and privilege that far too many people don't have access to... I'm not trying to shame anyone's choice to stay, whatever their reasons for doing so might be.

What I am saying is that if you can leave, and want to, and the only thing holding you back is concern for your kids emotional well-being and overall stability, that should not be the deciding factor. Because, as it turns out, by staying in a dysfunctional (or even merely unhappy) relationship for them, you aren't really helping anyone. The fact is, whether you're the victim of domestic abuse, or you and your partner simply don't love one another anymore, or fail to get along the majority of the time, staying together for the kids is not a healthy decision. Here are seven reasons why, because contrary to popular belief and prevalent social commentary, you do have to take care of yourself first if you want to be a good mom.