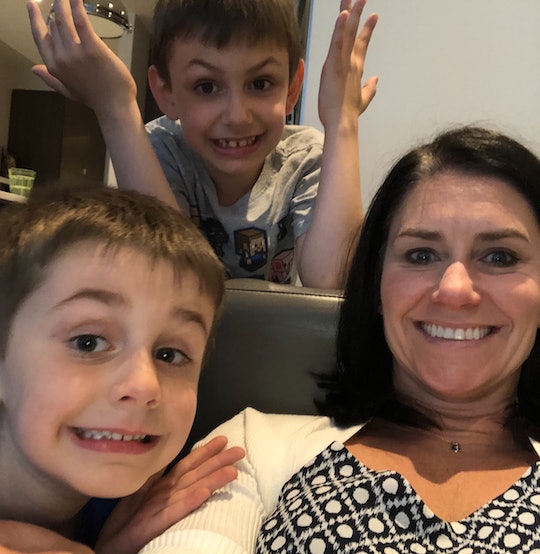 Courtesy of the author

Becoming A Mom Made Me A Better Leader & I'm Not Alone

I thought my life would be complete the day I finally became a mom, but of course I was wrong. After years of battling infertility, once my dream finally came true I realized having a baby wasn’t the be-all-end-all, but rather a transformative beginning. Motherhood was nothing like I imagined it— but for all the good, the bad, and the in-between, it changed me for the better — and I have proof that I’m not alone: New research from Berlin Cameron, Kantar, and The Female Quotient shows that 75 percent of mothers think having kids has made them better leaders.

I’d wanted to be a mom ever since I was 5 years old — but when the time came to try in my mid-30s, it felt impossible. I hit the brick wall of infertility and feared my dreams of becoming a mother would never come true. It actually became something of an obsession. It halted my career, it halted my marriage — the only thing that made me feel like I had some control over the situation were rituals like eating pineapple and guzzling alkaline water and black slug tea from my acupuncture doctor that I thought could solve the problem.

I was one of the lucky ones. I finally got pregnant and had a baby boy. But motherhood was nowhere near the perfect, complete, balanced life I’d imagined. It was messy. It was hard. It was emotional. Mostly, though, it was unpredictable. The perfect little path I had drawn for myself all came tumbling down — and that was beautiful.

Most of my friends all thought I would be the overly-protective, strict mother type. But motherhood actually had the opposite effect. It stripped away my barriers, made me vulnerable, and opened the door to connections. Going back to work after this early journey in motherhood wasn’t easy, but I found I was I was armed with a new set of armor: my true self.

I know that motherhood changed me for the better, yet I'm all too familiar with the concept of the 'Motherhood Penalty' and how moms are looked down on when they say they have a parenthood commitment, but fathers are applauded for their dedication.

This vulnerability made it easier for me to connect better to people and to new ideas. It opened up difficult conversations with my male boss, for one. After having my second son, I told him I didn’t think I could be away for an entire week on a client trip to Japan. Before becoming a mother, I would have never thought of saying no. He said, “Jen, if you want to become an executive you’re going to have to do things like this.” Leaving my kids was so hard, but I made it work and pumped the whole time I was gone, returning with liquid gold to my baby and toddler, who both seemed relatively unfazed.

There was no way to be perfect in motherhood, and it was no longer something I could strive for at work, either. I went back to work with the approach I had to tackle motherhood with — testing and learning as I go. It meant not investing so much in every decision before jumping in, and the freedom felt glorious. It was OK to hear crying and not be able to to figure out a solution. It was OK to fail, but it was brilliant to get that smile when you succeeded.

At work, this led me to taking risks that I wouldn’t have taken before. I started to ask for things I wanted that would push me further in my career — like speaking engagements at Cannes, when I had never spoken publicly before. And surprisingly, they said yes! I started forming the professional point of view that my boss had been asking me to express for years. Getting this POV into writing was a challenge, but I forced myself and asked to be published. Sometimes I got a no, but just like I had to as a mom, I kept pushing and allowed myself to be open to change — this always led to a yes.

Being the person we want our kids to look up to is a powerful motivator.

I know that motherhood changed me for the better, yet I'm all too familiar with the concept of the “Motherhood Penalty” and how moms are looked down on when they say they have a parenthood commitment, but fathers are applauded for their dedication. This discrepancy led me to the desire to flip this penalty on its head and prove mothers do make better leaders. According to the 1,003 respondents in our Reframing Motherhood Research, the vast majority of mothers think that motherhood has made them a better leader by making them more empathetic, more efficient, and more respectful of everyone’s time. Even our coworkers who don’t have kids agree that having a boss who’s a parent means those bosses are typically better multi-taskers and more understanding of the work-life balance.

At Berlin Cameron, with our division Girl Brands Do It Better, we are focused on hosting events for women that open dialogues in the workplace. Monday morning, we held our Reframing Motherhood event sponsored by Citi and Romper, which focused on the realities of motherhood. In leading up to it, I wanted to understand from some of the amazing moms I know about how having kids has changed them for the better — and the worse — in the workplace.

“I no longer allow myself to get mired in the minutiae,” Jennifer Breithaupt, Global Consumer Chief Marketing Officer of Citi, tells me. “Motherhood has absolutely made me a better leader, as it forces you to prioritize the things that matter — both in life and work.

“My first born was in and out of Children’s Hospital for asthma and I was stressed about his ability to breathe,” says Sara Saunders, an associate brand director at P&G. “That put all of my job and work into perspective, and made me realize that there is much more to life than work. As a leader, grounding is critical because you can manage your team’s energy and focus against real crises instead of stressing about everything.”

Being the person we want our kids to look up to is a powerful motivator.

“Because I felt that I needed to be a role model for my kids, I started living my passion and purpose and taking more risks as a leader," Tiffany Dufu, founder of The Cru and author of Drop the Ball, tells me. "I started making more power-based decisions and fewer fear-based decisions.”

Another author, Erica Keswin, of Bring Your Human to Work, believes that becoming a mom turned her into a person who can read between the lines. “A baby may seem upset about one thing, but we have to actually investigate the different types of cries and learn about who our baby is,” she says. “There is no one-size-fits-all technique, which is of course also the case with employees at work.”

“Motherhood helped me realize I needed a no-regret policy, and to lead by example,” Shelley Zalis, founder of The Female Quotient, tells me. “As a boss, I encourage the same policy and tell my employees if you're going to regret missing a family event or something that’s important to you, don’t skip it. Lean on your colleagues and share the work burden so you won’t miss something that you will regret.”

Last but not least, Ali Call, founder of Ali Call Consulting, says, “I have become more attuned to the needs of others and more empathetic, which has created better client connections. I feel that level of trust results in a better experience for everyone, and it really took becoming a mom to expand this horizon.”

Of course, it’s a complicated, complex journey, and being a mom in the workplace comes with complications. It’s a learning curve, and it’s not all positive.

“After becoming a mother I became irritated that I could run performance circles around other people [who didn’t have children] when I was ostensibly carrying one baby on my hip and another on my back,” Dufu confesses. “I'd be the first one in the office and would ask aloud, ‘Where is everyone? All they have to do is get themselves dressed in the morning!’ Now I'm ashamed that I was so terrible. I've really had to evolve.”

And forget about the balancing act! “In my book, Pick Three, I talk about how at any given point in our lives we get to choose three things to focus on: Work. Sleep. Family. Friends. Fitness. Pick three," Randi Zuckerberg, founder of Zuckerberg Media, says. "Right now, I am a phase in my life where I am picking work and family every single day. Which only leaves one more category open. I definitely feel a sense of missing out on networking, peer mentoring, and friendships — but I look forward to getting it back one day when my kids are a bit older!”

The great thing is that other moms have charted a course and we can learn from them.

“I would tell new moms to give themselves grace, ease in, and learn how to do things more efficiently, which doesn’t mean less effectively,” Saunders shared when I asked her advice for new moms.

“The worst thing is the constant guilt,” Zuckerberg adds. “When you’re with your kids, there is guilt about what you could be doing to get ahead at work. When you’re at work, there’s guilt at not being home. That’s why my ‘pick three’ philosophy has truly helped. It has given me permission to focus on my priorities for the day and not feel guilty about the things I am not doing.”

Seeing the world through the eyes of babes has really opened up my world and given my career a new life. It’s a life that’s complex and vulnerable and completely unexpected (even my carefully laid plans were derailed). But being able to let go of some of the control and be free to experiment and grow has helped me to be a better boss, a better employee and yes, a better mom.

More Like This
Sex And Mom Guilt: When I Date Someone New, Am I Cheating On My Kids?
Dr. Jill Biden Just Delivered Some Frank, But Powerful, Advice On Motherhood
Reddit Applauds Mom Of Five Who Stood Her Ground & Left Sleeping Dad Behind
I’m A Newly Single Mom. How Do I Get Over My Body Insecurity?