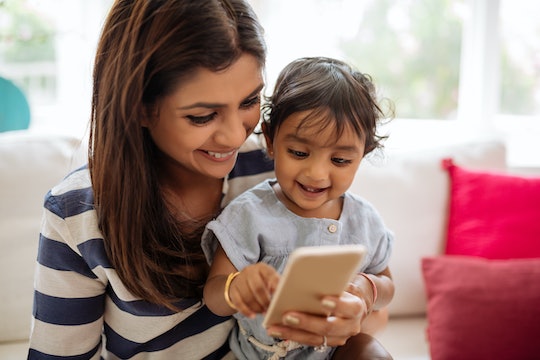 It’s no secret that having kids is often seen, if not a career killer, then as at least a career ~slower-downer~ for women. Meanwhile, going back to work isn’t a “choice” for so many of us — it’s a necessity. In a country woefully lacking in support for parents, with a total dearth of affordable childcare and a pathetic lack of sensible family leave policies, it’s no wonder that the “motherhood penalty” is a clear and present fact of American life. But new research shows that, despite a solid third of parents believing that having kids is a detriment to their careers, a vast majority of both fathers and mothers say becoming a parent made them a better leader. So how do we get the word out to the rest of the workforce?

The Reframing Motherhood research published in May 2019, and done in partnership with creative agency Berlin Cameron, Kantar (a data, insights and consulting company), and The Female Quotient, an organization dedicated to advancing equality in the workplace, surveyed 1003 respondents, 605 of which had children and 398 of which did not. The researchers say they set out to quantify gains in skillset after children, in the process busting the conventional wisdom that underlies the “motherhood penalty.” Parenthood, they say, is actually an opportunity.

“The skills that you develop as a parent — empathy, multitasking, flexibility, understanding, time management, communication skills, staying calm under pressure, and many more — are all skills needed for being successful in the workplace,” says Jennifer DaSilva, the president of Berlin Cameron. Moms are often penalized in the workplace because children are perceived as essentially taking our attention away from work. Yet, DaSilva argues, the skills that we’re developing while taking care of our children are actually beneficial for workplace culture.

“It’s time to flip the script and shine a light on the skills of parenthood,” Shelley Zalis, CEO of The Female Quotient tells Romper. “The best leaders are caregivers and yet we are losing our best leaders to caregiving!”

This paradigm shift is huge, especially for working moms. Because it’s no secret that men are often rewarded in their careers once they become fathers, as illustrated time and time again. It’s called the “dad bonus” — as opposed to the "motherhood penalty" — for a reason. So how did the Reframing Motherhood research pan out?

It’s not until you become one yourself that you realize being a parent can actually make you a better leader.

Interestingly, the study highlighted something that makes a lot of sense to me, and which helps to illustrate where there’s a big gap between the perceptions of parents, and of non-parents: it’s not until you become one yourself that you realize being a parent can actually make you a better leader.

In the study, 77 percent of parents agreed that being a parent makes someone a better leader, while only 25 percent of non-parents felt the same way. Even more telling is how that breaks down across gender lines: twice as many men without kids as women without kids feel that becoming a parent has the benefit of making a person a better leader (31 percent vs. 16 percent).

This is understandable at face value — one one hand, if I’m not a mom, why would I assume that the moms I work with are any more qualified in any way than I am? But then why don’t men feel equally skeptical that becoming a father will make them a better leader? Hello, and welcome to the patriarchy! Men in positions of leadership — and it is overwhelmingly men — face less pressure to be an "involved" parent.

After having kids, women report feeling more pressure to be responsive, confident, and hardworking that they did before having kids, whereas fathers in the study actually felt that being hard-working was slightly less important after having kids than before.

But perhaps more to the point, the “motherhood penalty” is a concept that’s so deeply baked into our culture, I’d hazard that most women assume becoming a mother will negatively affect their ability to be a great at their jobs, and on the whole, their careers... so they often assume that to be true of their colleagues who become moms. Recall the brutally honest 2016 op-ed by Stella Bugbee, editor-in-chief and president of The Cut, on how she felt about moms in the workplace before she became one.

"I wish I could say that I stood up for her when my co-workers made dismissive comments or didn’t invite her to meetings," Bugbee wrote of a former coworker, a new mom she calls Aurelie in the piece.

Instead I have to admit that I participated in the casual disapproval. Even though I was never outright cruel to her, I know that I never viewed her as a person to take seriously. I considered her unambitious; I judged her choices, and felt superior to her because she didn’t seem to want to run projects or move up. Though it was never explicitly stated, the big boss seemed to consider her a charity case. To be clear, she was a hardworking person who got her work done in the hours between 8:30 and 6:30 — a ten-hour day, no less! Those of us who’d worked till 11 p.m. would arrive around 10 a.m., get coffee, and start work in earnest around 11:30. We’d take lunch at two. We were less efficient than Aurelie by far.

Bugbee’s views changed, of course, after she had kids, and as this study strikingly illustrates, that’s a common occurrence.

Furthermore, it seems that moms still have a harder time reconciling what’s happening in our careers with what we understand to be profound personal growth. Fathers (surprise!) in the study are more likely than mothers to strongly agree (49 versus 38 percent) that being a parent makes them a better leader. And after having kids, women report feeling more pressure to be responsive, confident, and hardworking that they did before having kids, whereas fathers in the study actually felt that being hard-working was slightly less important after having kids than before (21 percent before having kids vs.19 percent after). So, even though moms suspect that motherhood has ultimately helped us hone our leadership qualities, we’re still much more likely than men to feel like having kids is a drawback to the way we are perceived at work, and we’re compelled to work even harder as a result.

And though parents in the study said they found that being patient, empathetic, and selfless are generally more important after having children, they are not as likely to say these characteristics are important to making a good leader. Women report much greater movement on these characteristics before and after having kids. (For example, before becoming moms, 6 percent of women feel that patience is important; after having kids, 33 percent do. Men, on the other hand, go from 16 to 30 percent.) That is, moms feel a greater need to be more patient, empathetic, and selfless after having kids than men, yet we don’t value these qualities as translating to the workplace.

Of course, there’s a reason that we feel this way. As a group, we’ve seen with our own eyes what the research supports time and time again: our careers are more likely to be affected negatively by our decision to have kids than the careers of our male counterparts with kids. Personal finance website The Balance recently dug into this disparity, writing, “According to a report from Third Way, a national think tank organization, the typical mother sees her earning power drop by 4 percent for each child she has. Interestingly, the opposite is true for men. Upon becoming a father, men see their income rise by 6 percent.”

Furthermore, The Balance noted, “The 2017 Women In the Workplace study found that 39 percent of women believed that their gender would make it harder to get a raise or promotion, or generally get ahead at work. Thirty-seven percent of women believed that they'd missed out on a chance to get a raise or be promoted in the past because of their gender.”

Non-parents who were there before and after a boss had children believed their bosses became more time-efficient, flexible, and responsive.

Insert here every single statistic you already know about how much of the home-life burden American fathers are still shouldering compared to mothers, and the picture becomes more complete. We’re not imagining things.

But, when it comes to the question of how to “flip the script,” culturally speaking, maybe it would help every single mom to know that, as the study suggests, it’s not just parents who perceive that parenthood changes people for the better. In the study, non-parents who have parent bosses believe that their bosses are generally better at multi-tasking, being empathetic to other people’s personal lives, being respectful of other people’s time (both work and personal), and making time to connect with their family and co-workers. Additionally, non-parents who were there before and after a boss had children believed their bosses became more time-efficient, flexible, and responsive.

The study also unveiled some data that suggests a potential shift in societal views as new generations of parents go to work. For example, younger parents are more likely to recognize that parenthood makes them a better leader: 55 percent of parents aged 21 to 35 “strongly agree” that this is true, compared to only 28 percent of parents over 45.

Unsurprisingly, the study revealed differences in what mothers and fathers value in their workplace, but there is also some very telling common ground. Moms more than dads were likely to value “feeling accepted and comfortable in my work environment” (26 percent of dads vs. 32 percent of moms), and flexible work schedules (26 percent of dads vs. 32 percent of moms) as being the “biggest accelerators helping personal career advancement.” And younger moms were even more likely than moms over 45 to value these things.

It is too much of a Mother’s Day wish to feel optimistic that there is a real opportunity here with a changing workforce whose values are perhaps more malleable, who are more likely to be able to re-contextualize work as a place where their paths and tracks will be rewarded, and where traditionally “female” soft skills are valued? After all, everyone benefits from a workplace that is flexible, where good work is rewarded, yes, but where good human qualities like empathy, patience, and a work-life balance are embraced and valued. And moms are leading the way.

More Like This
Ginger Zee Had A Perfect Response After A Troll Asked Her "Who's Raising Your Kids?"
It's A Beautiful Day In Jenny Slate’s Neighborhood
AAP Says Kids Will Face "Grave Consequences" Now That Roe V. Wade Is Overturned
Ketanji Brown Jackson Spoke Directly To Her Daughters In Her Powerful Opening Statement