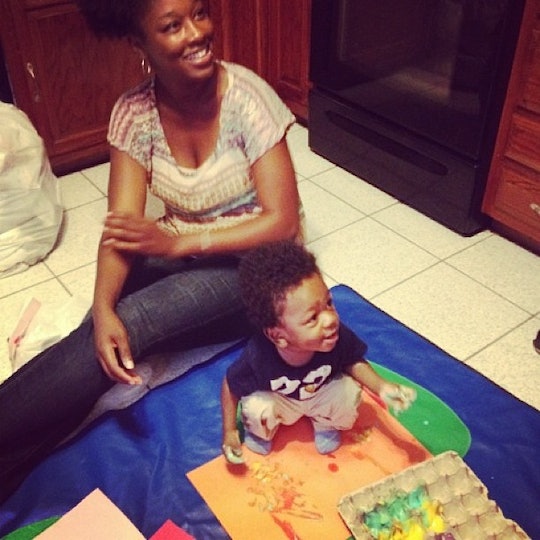 Becoming A Single Mom Made Me Realize How Strong I Am

Telling my father and step-mother that I was pregnant with their first grandchild, a beautiful little baby boy, was not filled with all the excitement and joy I'd imagined. Sitting in their backyard under the summer sun, my step-mother grilled me on what my future plans were for my education, for my son, and for my relationship with his dad. “Listen," she said, with a deep and sincere look of concern, "the last thing I want for you is to be a single mother or someone’s baby mama because you two don’t feel like getting married right now. You need to nip that in the bud immediately." Two years later, as my son’s dad packed his stuff up to move out of our apartment, I stood in the doorway holding our little boy and I heard my step-mother’s words once again ringing in my ear.

Watching him wheel his final pieces of clothing out, I realized that I’d just become the kind of mother everyone judges. The one our society stigmatizes, short changes, and criticizes. To say that becoming a single mother has been nothing but sunflowers and roses would be a total b*llshit lie that no one would believe anyway. But it's also changed my life in ways I never expected.

That initial blow hit me in the gut. It sliced me in half, right down the middle. For months after we'd split up I blamed myself. How could I let my family turn into this? What kind of mother can’t even keep her family together? Even worse, I had to tell all of the family and friends who were rooting for us to make it that we'd failed. I’d let them all down and it felt like it was all my fault.

My ex and I vowed that we weren’t going to be those kind of people — the ones who break up after having a baby. We were supposed to beat the statistics facing young, parents of color. But did, and now we were. Outside of the emotional earthquake crumbling my insides into pieces, I had to deal with the financial consequences, which only worsened the shame I felt.

There was one thing that changed how I felt about being single mother. It made me see that I have absolutely nothing to be ashamed of and everything to be proud of.

For a few months during after we'd split, I let myself sink into a self-made pity party completely. I cried and I cried and I locked myself in. The fact that we had to split time with our son between two homes was nearly unbearable. To be honest, I considered running away with him several times to escape the feeling. But there was one thing that changed how I felt about being single mother. It made me see that I have absolutely nothing to be ashamed of and everything to be proud of. Crying on the phone to one of my good friends, a woman whom I admire greatly, she told me,

Your son will grow up and brag to his friends and future wife about how great you are. He will thank you when he realizes the sacrifices you’ve made.

After that conversation, my entire perspective changed. Just like that, I'd gained a new form of clarity on our situation and my life that hadn't been there before. My identity as a single mother took on an entirely new meaning. Now I wear it as a badge of pride, not a veil of shame.

Making the decision to become a single mother is one of the most selfless things I've ever done and I am damn proud of myself for making that choice.

Here’s the thing that everyone gets wrong about being a single mother: Making the decision to become a single mother is one of the most selfless things I've ever done and I am damn proud of myself for making that choice. My son does not have to be a casualty of our separation. He is not a statistic. He is the product of two people who love him deeply. As a single mom — but also just as his mom — I work with his dad so that we can be the best parents possible. Our relationship didn't work out but that has never once meant that our parenting won't.

It’s been about two years since my ex and I split up. Before we made the decision to separate, we fought and argued on a daily basis in front of our son. We despised each other. We were like two opposing magnets trying to force a relationship to happen for the sake of making our family work. The closer we tried to get, the further apart we were pulled. Since then, I've learned that being a single mother is about sacrifice and immense love, two things that any other mother gives to her child. Family is not a one-dimensional term. Family is whatever you want it to be. My son's father and me aren’t in a romantic relationship with each other, but we've never once stopped being a family unit — and we never will.