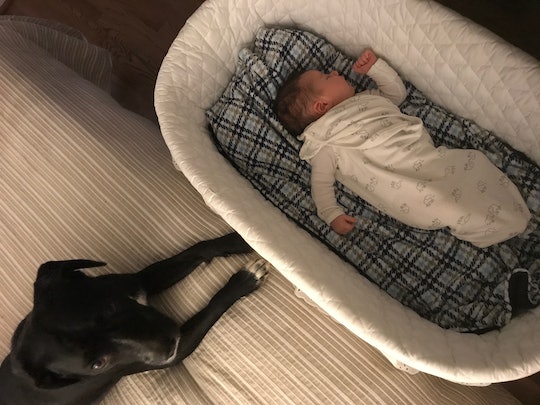 Being A Dog Parent Prepared Me For Having A Baby, Really

I’ve always wanted kids; I was never as sure about raising a puppy. Then I spent six months living with someone who brought home an eight-week-old golden retriever puppy, and I see no way to make it out of that experience claiming not to love dogs. I’m not convinced it’s possible to cohabitate with a ball of clumsy, silly, loving golden fluff and not want one of your own. Later that year, my husband and I decided we might be ready to be dog parents.

We were also close to our mutually decided time for trying to conceive (a human), but for all we knew, that could take months (if not years). Rather than letting the dog-idea gestate for 40 weeks, I hopped onto the internets one night in September and started browsing rescue organizations in the DC area for “female puppy.” I found exactly what I was looking for. Within an hour I had completed a rather extensive online application and then told my husband we might be getting a dog in a few weeks! He was more shocked by that piece of information than when I told him I was pregnant (less than nine months later).

The week before we picked her up was spent in a frenzy of gear-buying, stocking up on puppy food, and researching neighborhood vets. The application asked, “What do you expect to spend on your pet in the first year?” I said, “$1000.” After our first trip to the pet store and the first Amazon bill, we were already halfway to my (delirious) expectations.

She was 9 pounds and 11 weeks old the day we brought her home. We named her Banana.

All we knew about our pup was that she had short black fur with a little white line down her nose. She was labeled as a “lab mix” with no other information. She was 4.4 pounds at six weeks, and looked so tiny in the hands of a male volunteer that held her for this puppy photoshoot. She was 9 pounds and 11 weeks old the day we brought her home. We named her Banana.

In the $1000 we expected to spend that year, I didn’t budget for buying a new dog bed, after she repeatedly peed on her first one during house training, or the toys she would learn to destroy in seconds, or the dozens of bags of food because each one only lasts about two weeks. I didn’t budget for the impulsive buys I would make weekly because the dog store was on my way home from the coffee shop — how could I resist those new treats? Or that colorful rope toy she would love to tug? Or that adorable dog jacket that will definitely not fit her for the rest of this winter season? I didn’t budget for the $350 we would spend on our first dog sitter while we traveled with my family for the holidays, or the Puppy School that was well worth every penny because for half of every class we got to watch all of the puppies play and trip over each other.

For the first few weeks — hmm, maybe months — we didn’t sleep through the night. As we crate-trained her, we listened to her howl after bedtime and alternated sleeping on the floor outside of her crate until she fell asleep. She had to go out once or twice every night to pee, until she learned how to hold it. We struggled with leaving her at home for more than an hour or two because, for a LONG time, she chewed her crate blankets or scratched at it so much that it scooted along our hardwood floor. (Yes, we tried EVERYTHING — treats, peanut butter-kongs, crate games, you-name-it. Girlfriend was (and remains) stubborn and did not like the crate for a while. We stand by our dog-parenting decision to stick with it; now she loves it.) Would we ever get a full night of sleep again? Will she always have to pee at 2 a.m.? Will our future children do the same?! (Yes, no, and yes.)

We have pet insurance, we love our vet (and she loves going to the vet), and we found three dog parks within a ten mile radius that we frequent. My Photos app was taken over with puppy photos within days. “Out of Storage” became my most common notification. For her first road trip, our car was packed with her blankets, food, carriers, toys, and extra blankets in case she peed on the other ones. (“How are we going to fit a dog and a baby in here?” we wondered.) We never travel without poop bags, and are constantly scouting the road for good places to stop and let her pee, then walk around a little bit. She caught kennel cough after that first trip; we felt like terrible puppy parents (she wasn’t fully vaccinated at the time).

When we introduce her to fellow dog parents at the dog parks, we say “Her name is Banana — it’s very fitting!” She’s a lovable nutcase with endless energy and wants nothing more in this life than battered tennis balls and to sleep on our bed (in that order).

She had no control of her destiny to be a big sister. But she taught us we were ready to be parents.

She sniffed his newborn blanket and decided to sleep on top of his onesie.

As we packed our bags and made our to-do list for our inevitable trip to the labor and delivery ward, we had multiple items for Banana. We had our favorite dog sitter on-call on and around our due date; we packed an extra onesie and blanket for the baby so we could bring them home to let Banana smell him before she met him. We showed her around the nursery, let her sniff all of the tiny clothes, and watched her eyes excitedly take in the new inventory of socks. For months we talked about “Lefty” (our alias for the baby) and how she’d have to learn how to take care of him with us, how he might make a lot of noise, and how he definitely would not sleep through the night.

Our standard “joke” was that having a puppy feels like about 30 percent of the responsibility (and life-freedom-zap) as having a child. With the sleepless nights and endless silly games and repeating ourselves over and over until she SITS her butt down and the ridiculous things we packed for vacations and the way we learned to budget an extra couple hundred dollars for said vacations when we opted for a dog sitter and, really, the heart-expanding love we have for her even when she’s driving us completely insane. It felt like, actually, she trained us.

She sniffed his newborn blanket and decided to sleep on top of his onesie (one of the most adorable photos our dog sitter has ever sent us). She licks his face without abandon — we try to direct her tongue to his hands or feet instead. When we change his diaper, she is RIGHT THERE to make sure we drop something. She’s as relieved as we are to crawl into bed at night, sans baby, and get some rest. (Oh, yah, she’s totally in our bed now.)

The sleepless nights were familiar in a way. The extra attention paid to getting out the door to go anywhere and extra things to pack for a road trip are no big deal. Learning to budget for everything another being needs (and the “nice to haves”), impulsively buying clothes on clearance that will only fit for a few months, and pediatrician visits haven’t been a total shock.

We hardly care that our young-adult freedoms have been totally zapped, because we had already adjusted our lifestyle, and we love having these littles around.

First she prepared us for parenthood, and now she’s teaching us what it might be like to have a crazy toddler on our hands. It’s bananas.