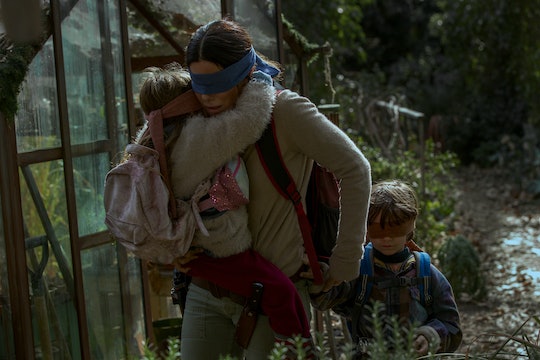 Whenever a new Netflix original movie premieres, I’m typically all over it. I’m the one watching it as soon as it drops and forcing everyone else to watch it as soon as possible so I can talk about it with them. But when Bird Box premiered on Netflix, it was a different story. Honestly, being a mom made watching Bird Box impossible for me for the simple reason that seeing kids in danger is a different kind of horror. As a mom, my views on seeing small children in scary situations on TV or in movies is horrifying because I can't help but imagine my own 5-year-old in those same scenarios.

I don't know if you’d call it "mommy brain" or some other annoying phrase, but ever since I became a mom, I also became extra sensitive to the on-screen distress and danger of children of all ages. Unfortunately, it’s prevented me from being able to sit comfortably through movies like A Quiet Place and TV shows like The Walking Dead. (Full disclosure: I do still watch The Walking Dead regularly because it's The Walking Dead.) But the apocalypse is no place for children and since Bird Box offers a different kind of end-of-the-world scenario, I'd decided a while ago that it was gonna be a no from me, dawg.

When I watched the Bird Box trailer for the first time, I was intrigued and excited because not only was Sandra Bullock, a queen, going to be in a new movie, but it was going to be on Netflix. As a mom, being able to watch a blockbuster style movie from the comfort of my home is a huge win, so thank you for that, Netflix. As the trailer went on, I realized that there were also two small children, around the age of my own son, in constant danger, and I couldn’t get through the rest of it. Yes, I turned off the trailer right then and there and declared that I would not be one of the millions who would watch Bird Box as soon as it premiered on Netflix.

My husband laughed at me and my sister — who has two kids of her own — rolled her eyes, and they probably weren’t wrong. I might be overly sensitive for not being able to get through the Bird Box trailer and for not being able to stomach the movie, but it’s scary for a totally different reason than the mysterious suicide-inducing mind control creatures. When I became a parent, the mom instinct kicked in immediately and I’d do anything to keep my son safe and free from fear of any kind. I may allow him his fair share of Goosebumps, but I literally cannot imagine him being in a situation similar to that of the characters in Bird Box.

I don't know how I even got through A Quiet Place without having a hernia take me out of the movie theater. If you haven’t seen it yet, then spoiler alert, because a 4-year-old boy gets snatched up by an alien for playing with a small toy that makes noise. It’s similar to the premise of Bird Box, only the aliens are sensitive to noises, so you can look at them but you can't speak or breathe too loudly. I remember the gasps and then silence in the theater when that happened and as a mom, I instantly sympathized with the parent characters. I’m sure that was the point and I know it’s all just fiction, but when you over-identify with a character or a movie, it becomes almost impossible to take yourself out of it.

Eventually, I did get around to watching Bird Box because I almost had to or I’d never understand the sudden onslaught of memes on the internet. As someone who watches TV as part of my job, I don't want to feel left out when it comes to pop culture references. But five minutes into the movie and I was already stressed out. I kept thinking about how I would have had to become the hard and matter-of-fact mom that Bullock plays and how my son, who’s used to only the occasional raised voice from me, would have to harden himself as well. (Although the fact that my son isn't afraid of me when I raise my voice probably means he's already hardened himself to some degree and I'm going to have to come up with a better way to be scary.) Suffice it to say, getting through the rest of the two hours wasn’t easy for me.

To be clear, I could handle the flashbacks. Malorie’s backstory was important and the idea of the survivors all camped out and working together in the middle of the end of days made for an interesting dynamic. It was all those cuts to Malorie on the river with Girl and Boy, while she fought to save the lives of all three of them, that really got to me.

I know that as a parent you can't always protect your children from everything, but you want to. Bird Box presents a problem wherein you might not be able to protect your children even while you’re the only person they’re counting on to do so. I don't like disappointing my son when he wants *just one* more scoop of ice cream. To think of being in a situation where disappointing him would mean putting his life at risk is actually unthinkable.

Bullock herself said that Bird Box puts you in the position of her character — making you imagine losing your own loved ones or trying desperately to protect them.

"It’s not an easy place to stay when you have to stay there for 15 hours a day and imagine family dying, your children dying, or the love of your life dying," she told Variety of filming Bird Box away from her two children. "But by the time I went home by the end of the day, I was so grateful I didn’t have to think those horrible thoughts, that I think every day as a mother in general out of fear." She added, "As a mom you think those thoughts. It’s just part of your makeup."

Being a mom does change the way you think about a lot of things. For example, I might have once loathed the sound of someone’s baby crying in public, but now I just want to pick up every wailing baby I hear and cradle them all to sleep. Obviously, I don't really do this because nothing is more uncomfortable than a random woman approaching you in the grocery story and trying to calm your baby down for you.

Basically what I'm saying is: since I can't handle it IRL, I can't take babies in distress on TV either, fictional or not. You show me a crying baby on screen and I'll show you me, at home, trying to fast forward with my eyes closed. Apparently being a mom makes me extra sensitive and empathetic, almost to a fault. Bird Box is about the unwavering love and determination of a mother more than anything and I appreciate the importance of that. But that doesn't make it any easier to watch as a mom myself.