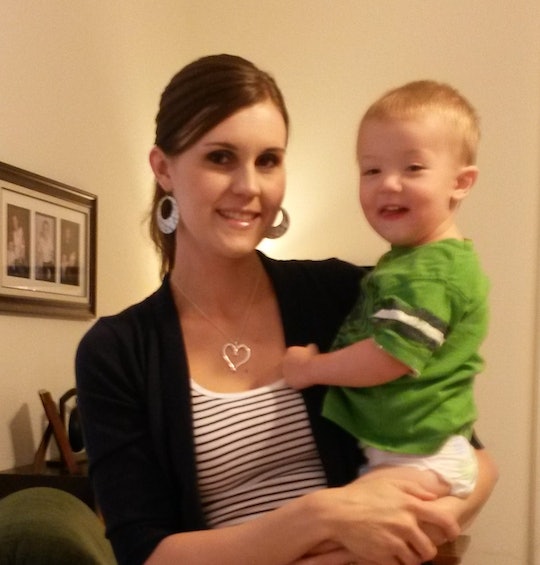 I've had anxiety my whole life, and although I didn't know what to call it until recently, it's affected all aspects of my life in one way or another. Growing up, my anxiety made me come across shy, nervous, and probably socially awkward, if we're being honest. Everything that seemed to be fun for other kids was a huge source of anxiety for me. Field trips, birthday parties, even riding the bus gave me a severe nervous feeling. Anything that was too loud, too chaotic, or too out of my control sent me into a panic. And years later when I became a mom, I quickly learned that parenting was too loud, too chaotic, and definitely too out of my control. I feared that my anxiety would affect my ability to be a mother — and it absolutely did. But here's the thing: Being a mom with anxiety didn't make me any less of a mother. In fact, I think it made me a stronger one.

When I had my first baby, I felt such a sense of purpose. For the very first time in my life, I felt like I had found God's plan for me. I felt like I'd been placed on earth if for no other reason than to be a mother to this precious little baby. Motherhood was a role I not only embraced, but one I dove into head first. I felt little anxiety for awhile, especially considering the fact that new babies force you to stay home a lot in the beginning. But home was my place of refuge, my sanctuary, and I was safe from anxiety there... or so I thought.

Anxiety is a tricky thing. It's not just a mindset, it's a pattern of thoughts that continually tell you something is wrong. It's like a fire alarm set in place to go off if there's an emergency, but for those with anxiety the alarm often goes off for no reason, telling you there's a fire when sometimes there isn't. It goes off at strange times and convinces you that you can't get through mundane, simple tasks.

I realized something crucially important about my habit to "avoid." I might think that leaving and going somewhere more comfortable is harmless, but I realized by doing that, I was teaching my children that it's OK to give up when they're afraid. That instead of facing their fears, however trivial they may seem to someone else, that it's OK to give in to the worry and fear.

Motherhood gave me such extreme joy, but hidden behind the precious cuddles, sweet kisses, and endless laughter, there was something overwhelming about being in charge of another person's life. And those parenting-related anxiety triggers only started to grow as I had more children. Things that other mothers seemed to enjoy, or at least deal with unfazed, sent me into an anxious frenzy. Play dates, grocery trips with multiple kids in tow, and even phone calls were a struggle for me. School drop-off led me down a spiral of anxious thoughts. What if he cries when I leave? What if I can't find a parking spot? What if I make him late and he gets in trouble because of me? The what ifs just went on and on in my head, getting bigger the more space they had to grow. I knew the thoughts were silly and trivial, but it's hard to argue with your own mind.

Then came the crowds.

Have you ever driven to a park ready to take your kids to play, only to turn around and leave because there are too many people? Sadly, I have — more than once. Play places, parks, and even libraries made me want to turn around and leave when I saw too many cars or too many people. Most other women I knew seemed so excited to go and give their kids a fun place to get their energy out, but I dreaded going anywhere that packed or that crowded. Those places felt like just another hurdle I had to overcome.

Every time I tried to go somewhere with the kids that gave me that completely-overwhelmed feeling, I was ready to give up at the first erratic heartbeat. That is, until one day I realized something crucially important about my habit to "avoid." I might think that leaving and going somewhere more comfortable is harmless, but I realized by doing that, I was teaching my children that it's OK to give up when they're afraid. That instead of facing their fears, however trivial they may seem to someone else, that it's OK to give in to the worry and fear.

Everyone is fighting something. Each one of us is trying to be better in spite of our inner struggles. Some moms fight depression, cancer, chronic pain, or past demons. I have anxiety and yes, sometimes my anxiety affects my parenting, but I don't have to let it affect it in a negative way. I can use what I've learned as a teachable moment for my kids. I can teach them that every time their minds try to play tricks on them, they can argue back against their anxiety. More than anything, I can teach my children that living with anxiety is nothing to be ashamed of or to hide from. There's nothing "wrong" with them for feeling the way they do.

I may not win against my anxiety every moment of the day, but I try to keep fighting everyday. My kids won't always understand why mommy needs to take deep breaths before getting out of the car, or why I get overwhelmed by everyone talking to me all at once, but what I hope to teach them is much bigger than a diagnosis. I hope to teach my children that bravery, by definition, is not about doing things that are easy, it's doing things that are hard for you. Having fears, insecurities, and panic attacks doesn't make me any less of a mother — if anything it makes me a stronger mother for my children. Living with my anxiety makes me the kind of mother who's constantly overcoming things for the sake of her children and herself.

Now that my oldest son is 6, he's unfortunately showing signs of anxiety. And although a study published in the Journal of Anxiety Disorders found that when a person develops anxiety before the age of 20, close family members are more likely to also have anxiety, no direct correlation has been established yet to answer the question of whether or not anxiety is hereditary. It makes me so sad that he'll have to fight as hard as I do to succeed in life, but it also gives me a calming sense of hope that my example will help teach him and his siblings to be brave.

Now when I get to the playground and it's packed, I look back at my son and smile. I take a deep breath and tell my kids (and myself) that it's gonna be fun. At school drop-off, I hold my head high, ready to handle any tears or tantrums that may come. When my head starts spinning from the constant chaos that comes with having three kids and four pets, I say a little prayer and ask for strength. I try to always be grateful for the overwhelming, super-rewarding job that motherhood is. If that doesn't work, I take a long bubble bath and start fresh the next day. I refuse to let one small part of me affect my ability to enjoy motherhood. I know this time in my life will go by all too fast and I don't want to miss it because I was too afraid to get out of the car.

Even when I'm comforting my son as he panics about staying in his bed, going to Sunday school, or facing the crowded playground, I don't want to lose my hope. I want to teach him to be strong by emulating that strength myself. Every time I face a fear, I hope he understands that everyone has fears, big and small. I hope he sees that every battle we're faced with is one we can win together. Anxiety will never be behind me, but I refuse to let it dictate everything in front of me.