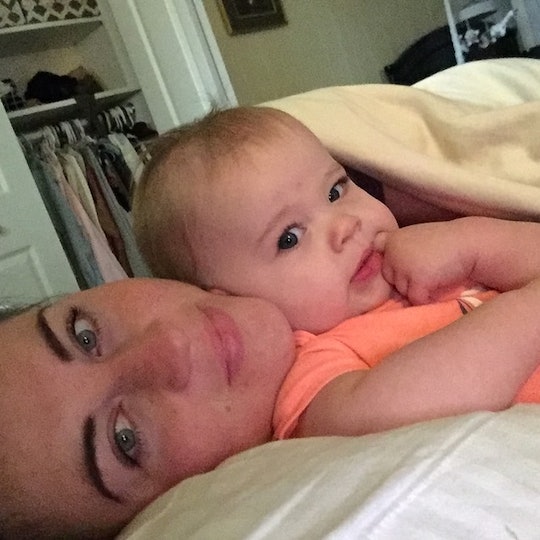 I think most single moms know “the look” people give them after they've explained they're no longer with their child’s, or children’s, co-parent. As a single mom, I get the, “oh, you poor thing,” eyes from people every time the fact that my son's father is no longer involved in our lives comes up. In fact, explaining that I am no longer with my son’s father is the one thing I dread whenever I first meet or get to know someone. It's usually followed by the question of, “Well is he involved at all?” And to be honest, I hate this question even more because when I do explain our situation — that my son's father is hardly around or involved — people feel compelled to quickly follow with, “well, at least he’ll have your dad and brothers to be good male figures in his life!"

Now, I’m not denying that my father and brothers would be excellent male role models for my son (and they are), but I'd also like to make clear that it's absolutely not their responsibility to raise or model what a man "should" be to my son. But for some reason, society reminds me at every turn that it's my duty as a single mother to provide my son with a strong male figure in his life because his father isn’t a reliable one himself. And I’m sorry but, f*ck that! Who says that I can’t be the one to teach my son what it means to “be a man”? Who says my son even needs to grow up with that nonsense in his head in the first place?

To be totally honest, I feel as though society has some messed-up view that just because I possess two X chromosomes, I cannot properly train my son in the ways of manhood. Is society afraid I won't be capable of teaching him how to repress his feelings properly? That I won’t know how to teach him to properly work out any aggression he feels because of my feeble lady-like bone structure? Regardless of what our society does or doesn't think is good for my son, it’s important to me that he knows his mom can teach him how to be a good, kind, and caring person regardless of whether or not she has a dick or not — especially because that's the limited way our society views masculinity and manhood.

Even if I don’t find anyone to spend the rest of my life with, I’m not a failure for not finding a man for my son to look up to.

As a single mom, I often don’t want to attempt dating again because if I do end up in a serious relationship, I don’t want my significant other feeling as though he needs to put on the Dad Hat. I worry that, in the future, this will be an issue if I do eventually end up dating someone seriously again. I'm afraid that I'll put someone else in the position of feeling like they unwillingly need to fully fill the "father figure" role, and that's not at all what I'm looking for. Of course I want to find someone who loves my child like their own and will help provide a life for him that is good, kind, nurturing, and understanding, but by no means am I searching for a partner solely because my son "needs a dad." It's no one else’s job to fulfill that male role-model position for my son, because even if I don’t find anyone to spend the rest of my life with, I’m not a failure for not finding a man for my son to look up to. And I don’t think this idea is so radical or progressive.

Reinforcing the idea that my son and I are somehow "lacking" because there isn't a man in our lives only perpetuates the ideal that as his mother and as a woman, I am not enough on my own.

I'm not sure why our culture limits my child-rearing abilities to simply nurturing and comforting my child, teaching him how to fold his laundry, and showing him how to make scrambled eggs. I don't want to raise my son in an environment where he views women as the ones responsible for cleaning house, making dinner, and coordinating car-pool pickups. And reinforcing the idea that my son and I are somehow "lacking" because there isn't a man in our lives only perpetuates the ideal that as his mother and as a woman, I am not enough on my own. Here's the deal, though: I am every bit as intellectual as I am nurturing, every bit as strong as I am smart, every pit as capable of teaching my son to drive stick as I am teaching him how to fold a bed sheet. I'm just as capable teaching my son the art of healthy competition as I am comforting him when he's hurt. And when I think of his figure, I have no doubts that he and I can break down the societal norms that boys need to be "tough" and "closed off." I want to teach my son that he can express his feelings in a safe environment, and doing so does not make him some inferior being.

Ultimately, I've never felt that raising my son in a single-parent household would hinder his ability to become a good, caring person. Brilliant men and women have come from single-parent households, like President Barrack Obama and director Jodie Foster, among countless others. Research even supports the fact that sons of single mothers can succeed in life. And I personally believe that remaining present in my child’s life and leading by example is going to be the best way to bring up a happy, well-adjusted kid.

I don’t pretend to understand the inner workings of the male brain, but I also know that society holds men and women to unfair and gross expectations. The idea that men should establish themselves as dominant and emotionally closed off while women should repress their sexuality and be innately nurturing at the same time is wholly unfair to both sexes, and in a roundabout way, I'm thankful my son won't grow up seeing this skewed narrative play out in his home. “Boys will be boys” is not going to be an excuse for bad behavior in my home, and I'll do my very best to prevent our culture from teaching him to repress his feelings as if that will somehow make him more of a man. I feel as though there are so many resources out to help me cater to my son’s needs as he grows and develops. No matter who he is, I won't ever render myself ignorant to his needs or to my own. I'll do whatever it takes to help him navigate life, but I won’t ever do it by limiting myself to fitting society's definition of a "mom."