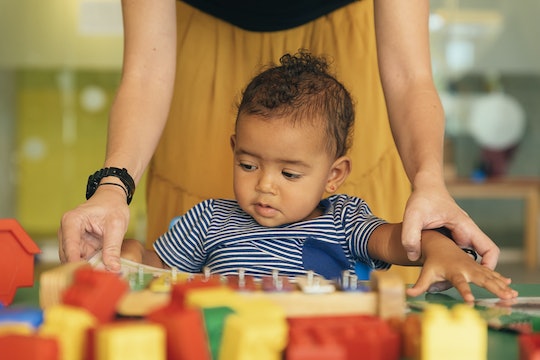 Being Wealthy Might Not Be As Important To Parenting As You Think, According To This Study

It's easy to judge yourself when you're a parent. Easier than almost anything else you do in a day, in some ways. Easy to pick apart your own life and imagine that you're not doing right by your kids, not doing enough. Easy to worry that you're working too hard or not working enough, worry that there will just never be enough money to offer your kids the childhood they deserve, whatever that might look like. Well, here's a comforting study for you to consider; it seems that being wealthy might not be as important to parenting as you think. Which might not come as much of a surprise to some, but could offer some reassurance to others who might equate wealth with successful parenting.

A comprehensive study published in the March issue of the medical journal The Lancet looked at children between the ages of 0 to 3 in four different countries, Argentina, South Africa, India, and Turkey, as reported by The Guardian this week. Researchers who took part in the study were specifically looking at developmental milestones in these four financially, culturally, and linguistically diverse countries as a means to discover how much environment plays a part in early childhood development. They recruited healthy children at 22 different health clinics in the country, as well as their caregivers, over the course of four years, from 2011 to 2015, according to The Guardian.

According to the report in The Lancet, the researchers in this study "excluded children with a low birthweight, perinatal complications, chronic illness, undernutrition, or anaemia, and children with missing health data." These children were excluded as a means to offer a comprehensive picture of the effect of socioeconomic differences on children whose basic needs were being met.

As Dr Roopa Srinivasan — a developmental pediatrician based in Mumbai, India who took part in the study — told The Guardian, previous research in this field did not really take the health of the child involved in the study into consideration. Instead, Srinivasan said that researchers "have often felt pressured to use what scarce resources we have to develop, customize and re-standardize existing ‘gold standard’ tools for use in our own settings, without which we are not taken seriously by bureaucrats or politicians."

In this study, which included 4,949 children under the age of 3, caregivers were asked to describe their child's developmental milestones using seven specific markers, according to The Lancet; expressive and receptive language, gross and fine motor, play, relating, and self-help. Researchers also took part by studying each child with a checklist. Here is what the researchers found; that health far outweighed environmental factors like socioeconomic backgrounds and cultural disparity when it came to hitting those important milestones. The scientists wrote in their report for The Lancet:

Our study advances the understanding of early childhood development by showing that many milestones in numerous domains are similarly attained across sexes and countries. We found that the attainment of almost all milestones is similar in the first year when environmental and cultural influences might have the smallest effect.

Of course it takes money to raise children. Food, clothing, shelter... it's not cheap. In fact, the average cost of raising a child in the United States hits a whopping $233,610 by the time that child reaches 17, according to a report by TIME. But there's a difference between money and wealth (don't I know it). It's nice to have extra money to be able to share experiences with your children, take them on trips and enroll them in fun after school programs. But this study notes that, as nice as all of these extra bonuses are for both children and parents, having wealthy parents won't have them reaching their milestones in the early childhood years than anyone else. As long as they're healthy, that seems to be the most important thing.

And honestly? That's rather comforting.