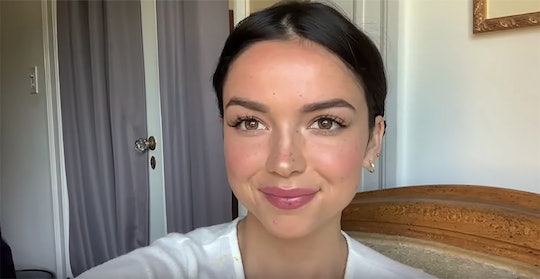 On Thanksgiving, this The Bachelor alum revealed she's expecting her second child. And a few weeks after breaking the happy news, Bekah Martinez and her daughter, Ruth, listened to baby number two's heartbeat for the first time, documenting the moment in an adorable video shared to Instagram.

In case you missed the exciting news, Martinez and her partner — rock climbing gym owner, Grayston Leonard — are expecting another baby in June, after welcoming Ruth in February 2019.

Unlike Martinez's first pregnancy, which came just four months after the couple met, she's not as nervous about motherhood this time. "We’re not fearful," she said in her 12-week update. "We’re delighted. I can see it on Gray’s face when he touches my belly and tell the baby he loves it."

Speaking of pure delight, Martinez shared the sweetest video of her and Ruth listening to baby number two's heartbeat for the first time, captioning the post, "Glad I got to share the moment with my little family."

The former reality star also admitted to feeling nervous every time she's about to hear the heartbeat, writing, "There’s something a little nerve-wracking for me waiting for that doppler to catch the heartbeat every time. This was the first time I’ve heard it this pregnancy."

Although it doesn't seem like Ruth understands what's happening (she's way more interested in the doppler control, LOL) it's cute Martinez decided to include her in this moment.

Before baby two's arrival, Martinez is making sure to include Ruth in pretty much everything she does. "Savoring this time while it’s just the two of us," she captioned a sweet shot of the pair on Monday.

As Martinez demonstrated in the heartbeat video, she wants to create as many special bonding moments with Ruth while she still can. And this isn't to say it will end once baby two arrives, but nabbing that one-on-one time won't be as easy. So here's to Martinez and Ruth sharing beautiful moments together, including this video of them listening to their new family member's heartbeat.

More Like This
John Mulaney Teaches His Son To Say "Ahh" After Drinking Water In A Super Cute Video
Alec & Hilaria Baldwin Welcome Baby #7, And Revealed Her Cheerful Name
Rihanna's First Post Since Giving Birth Confirmed She's Performing At The Super Bowl
Gabrielle Union Admits She May Be Becoming A Bit Of A Dance Mom With 3-Year-Old Kaavia