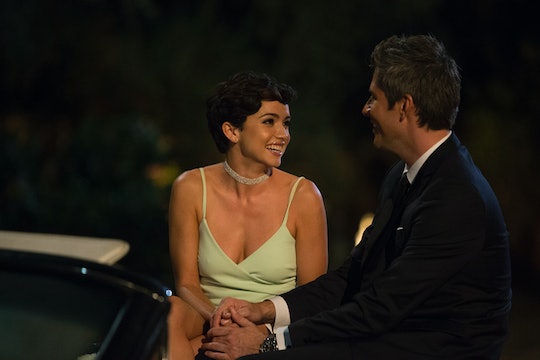 Bekah's Instagram Proves This 'Bachelor' Contestant Is A Thrill-Seeker

There might be a good amount of mystery surrounding Bekah Martinez on The Bachelor Season 22, but social media tells you a lot more than you might think. And Bekah’s Instagram before The Bachelor proves the contestant is a thrill-seeker who’s always up for an adventure. Her official job listed on her Bachelor bio is nanny, but when she’s not showing her maternal side with little ones, Bekah is all about living life to the fullest.

She revealed in her Bachelor bio that she’s an avid rock climber and even placed third in her division for a national competition, but it looks like Bekah has an adventurous spirit overall, and not just where the sport is concerned. She’s also keen on swimming in hot springs, visiting skate parks, and cliff-diving, so she definitely seems like one of the contestants to watch for this season.

In Bekah’s Bachelor bio she said that in five years she sees herself "Teaching art or owning an art studio for children, hopefully married and planning to have babies!" So maybe part of her adventurous personality comes with wanting to fit in as much as she can before she’s ready to actually settle down. I mean, no one ever said that a mom can’t also cliff jump every now and then, but Bekah seems content being the thrill-seeker she is, sans kids for now.

After some detective work, it looks as though Bekah is roughly 22 years old (though her age is mysteriously absent from her Bachelor bio). And while she definitely hits almost the very minimum age requirement for The Bachelor, in some ways, Bekah seems fearless and confident of what she wants. And what she wants is Arie. Not it's just a question of whether or not he'll feel the same way.

Regardless, Bekah seems like she’s always up for something fun, whether it’s hiking near her home in Los Angeles or traveling to the beaches of Costa Rica. Having that mentality is probably going to be what she needs to get through The Bachelor, to be honest. In the extended promo for Season 22, there are a handful of women shown crying at different times and at least one argument between Bekah and another contestant. These are both totally expected for any season of The Bachelor, but hopefully she’ll able to keep her cheerful spirit up throughout the process. Or, ahem, journey.

Aside from the physical and mental thrills that Bekah’s favorite activities bring, her Instagram also shows that she’s unafraid to do the riskiest things with her hair, including her current pixie cut, which is probably the cutest hairstyle in the history of The Bachelor. In the past, she’s also been blonde with a cropped wavy hairstyle, had shades of purple thrown in, experimented with blue, done the gray thing, and even sported bangs. With every single look, she still managed to pull it off though, so at this point she could go even shorter than her pixie cut and still look fabulous.

Since we’re bound to see the more dramatic side of pretty much every contestant this season, it’s important to remember that these are still real women from the real world. And as far as Bekah’s Instagram from before The Bachelor is concerned, she’s pretty cool IRL too.