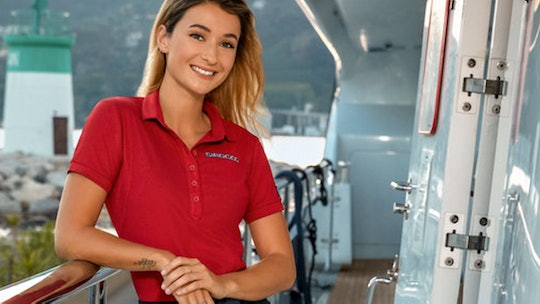 I Can't Get Over Anastasia’s Instagram From 'Below Deck Mediterranean’

Well, that was a first. Anastasia Surmava might have been hired as the third stew on Season 4 of Below Deck Mediterranean, but she was called in to take over chef Mila Kolomeitsev's duties following a slew of mistakes on the Sirocco yacht. Although fans were shocked by Mila's dismissal, others were interested in seeing more from the new cast member born in the Republic of Georgia. As it turns out, Anastasia's Instagram from Below Deck Mediterranean shows the chef living it up since her time on the Bravo reality series.

You can find Anastasia's Instagram profile under the handle @nastiasurmava. Like other Below Deck Med crew members, Anastasia's feed is filled with inspired snippets from her adventures around the world, including photos set in Greece, Italy, and France. Recently, the Bravo star also shared a sweet photo in Sri Lanka featuring her pastry chef mom, who has been a notable influence in Anastasia's life.

In an interview with Decider, the Below Deck Med cast member revealed what her mom thought about her appearance on the Bravo series.

"Mom is pumped on the show. Mom has been a fan of the show since it came out," Anastasia said, explaining that the show was exactly how they both previously imagined.

"She’s just really proud of me," she continued. "I’m an only child so I’m her lifeline. Mom’s important and Mom’s really excited about the show."

That said, Anastasia's self-proclaimed "immigrant work ethic" continues to shine, as the Below Deck Med star proves to work just as hard as she plays. According to Anastasia's Instagram bio, the stew-turned-chef hasn't stepped away from the food industry, and she is now the executive chef and creative director of an eco café and yoga studio called Ajna. Still speaking with Decider, Anastasia revealed that she started her new Sri Lanka-based business venture two weeks after filming Below Deck Med.

"I’m gonna be there for a while, I’m still in the process of building everything," Anastasia told the publication. "The shala was open for about two months, the café was open for about 20 days, just a soft launch. We got great reviews, people loved it, and I’m going back in September to finish building everything and then train my staff on the rest of my menu and staff it with yoga teachers and rock it."

Anastasia might be on to her next adventure in real time, but Below Deck Med is far from over. And if there's anything the reality star wants fans to know about upcoming episodes, it's that there is still plenty of fun to look forward to. She told Decider:

I’m excited for you guys to see an interior team that actually is a cohesive, strong, girl boss gang. These ladies that I work with, they rock it and we all are so different so you would think that maybe we wouldn’t get along, but we all just recognize each other and we respect each other and I think it’s really beautiful to see a team of women that truly lift each other up instead of being catty. I think it’s really cool to have strong women representing yachting.

Everyone and their mother should probably get excited about Anastasia on Below Deck Med. She's got the skills and charm to be a success, and her Instagram proves it. So stay tuned. Below Deck Mediterranean Season 4 airs Monday nights on Bravo.