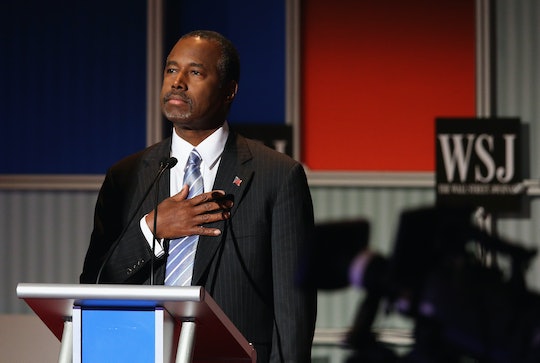 Ben Carson has been dealing with a lot of questions about his background and life story lately, and tonight he was asked point-blank how he feels about it. But surprisingly, the candidate took an interesting route: Carson responded to lie allegations by calling Hillary a liar. It was actually a pretty slick political move when you think about it, especially since this debate crowd isn't exactly packed with Hillary fans. (In fact, their WiFi password was “StopHillary.) He then went straight to Benghazi:

We should vet all candidates, I have no problem with being vetted. What I do have a problem with is being lied about ... I don’t even mind that so much if they do it with everybody like people on the other side. But when I look at someone like Hillary Clinton, who sits there and tells her daughter and government officials that 'this is a terrorist attack,' but tells everyone else it was a 'just a video,' where I come from, they call that a lie.

From there, Carson compared Hillary’s testimony on Benghazi with his being misunderstood:

I think that’s very different from you know, someone misinterpreting what I said when I said when I said I was offered a scholarship from West Point….we have to start treating people the same. People who know me know I am an honest person.

Whether you believe Carson was just misunderstood or not, it's not the most satisfactory answer. Even viewers noticed that he threw Clinton under the bus, and Twitter was pretty quick to react:

Carson’s response illustrates that the best way to remain high in the polls is to keep attacking Hillary Clinton. And if the base is willing to overlook Carson's lies, that must mean they're a little nervous about Clinton's chances next year.