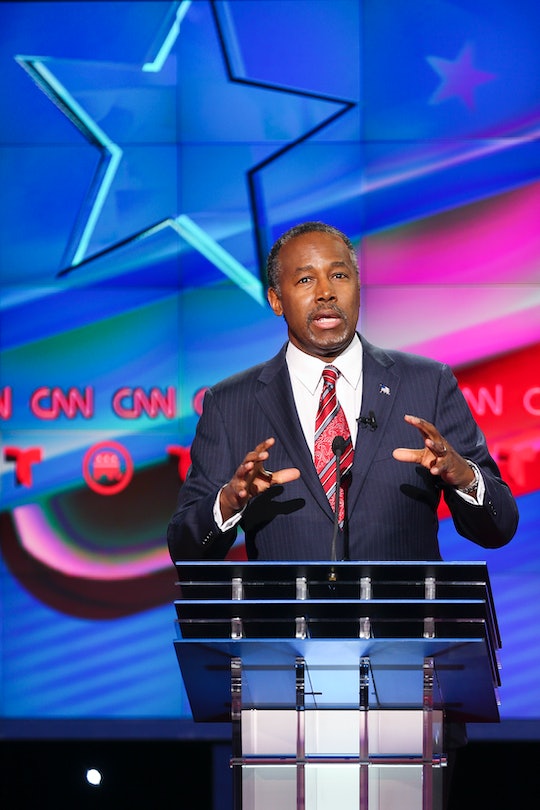 Ben Carson See's "No Path Forward" In 2016 Campaign, But Refuses To Actually Drop Out

On Wednesday, Retired neurosurgeon Ben Carson said he sees "no path forward," but that he isn't officially dropping out of the 2016 election, according to the Daily Beast. After Super Tuesday, Carson came away with few delegates and still remains in last place behind the other four remaining Republican candidates, according to the Associated Press. Carson had a total of eight delegates after Super Tuesday, when 12 states and one territory held caucuses and primaries.

Carson said that he will not attend the GOP presidential debate Thursday night in Detroit, but he said that he isn't suspending his campaign, according to a statement on his website:

I have decided not to attend the Fox News GOP Presidential Debate tomorrow night in Detroit. Even though I will not be in my hometown of Detroit on Thursday, I remain deeply committed to my home nation, America. I do not see a political path forward in light of last evening’s Super Tuesday primary results. However, this grassroots movement on behalf of “We the People” will continue. Along with millions of patriots who have supported my campaign for President, I remain committed to Saving America for Future Generations. We must not depart from our goals to restore what God and our Founders intended for this exceptional nation.

I appreciate the support, financial and otherwise, from all corners of America. Gratefully, my campaign decisions are not constrained by finances; rather by what is in the best interests of the American people.

I will discuss more about the future of this movement during my speech on Friday at CPAC in Washington, D.C.

The statement honestly sounds a bit like "I'm not doing that well, but I don't want to give up!" Yeah, it's gotta be a bummer, Carson. But save yourself some money and just call it quits. Also, save yourself some laundry, 'cause we all know that was an issue, too.

Carson's campaign was first characterized as being outside of "establishment" politics, much like Donald Trump's. But then he made a number of gaffes and the country stopped taking him as seriously. It's hard to say when it all began. Carson said at one point that the Affordable Care Act was the "worst thing that has happened in this nation since slavery,” according to the Washington Post. And then there was the time that he compared campaigning for same-sex marriage to people who want to legalize bestiality, according to Mic:

Marriage is between a man and a woman. It's a well-established, fundamental pillar of society and no group, be they gays, be they NAMBLA, be they people who believe in bestiality — it doesn't matter what they are, they don't get to change the definition.

Then there was that other time he said that Joseph, like, the Biblical figure, built the pyramids to store grain. But, the nail that really closed the door on Carson's campaign was when he looked as though he was falling asleep at one of the Republican debates. All in all, it's not surprising that Carson is choosing to kind of end, but not really end his campaign, but it is a little strange that he didn't do it sooner.