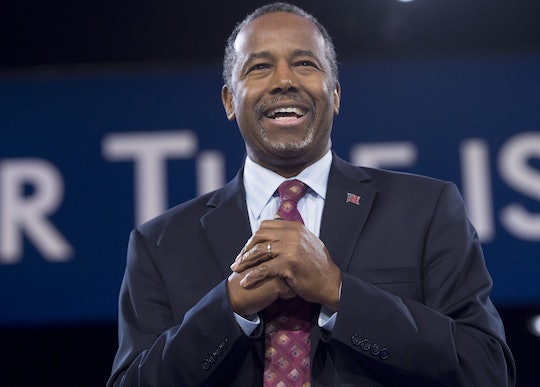 On the heels of the CNN Republican debate, news broke that Ben Carson plans to endorse Donald Trump's bid for the Republican Presidential candidacy, according to sources familiar with the discussions taking place between the two men. Dr. Ben Carson, a retired pediatric neurosurgeon, recently suspended his campaign for the White House. And now it's reported that he plans to throw his lot in with well-known New York businessman Donald Trump.

Update: Ben Carson endorsed Donald Trump on March 11, according to CNN. He said that the Trump people see on stage is not the "real" Trump:

He's actually a very intelligent man who cares deeply about America. There's two different Donald Trumps. There's the one you see on stage and the one that's very cerebral, sits there and considers things very carefully.

In a recent interview with John Gibson of Fox News Radio, Dr. Carson said he believed there were "Two Trumps": “There’s the Donald Trump that you see on television and who gets out in front of big audiences, and there’s the Donald Trump behind the scenes. They’re not the same person. One’s very much an entertainer, and one is actually a thinking individual.” Dr. Carson went on to tell Gibson that Trump is “someone who you can reason with very easily, and who is actually very comfortable talking about issues, and recognizing that he doesn’t have all the answers.”

Previously considered a Conservative favorite before his disappointing primary race and underwhelming debate performances, Carson has yet to officially confirm his endorsement of Trump, but political analysts and insiders are reporting that the endorsement is coming tomorrow morning at a press conference with Trump at his private club, Mar-A-Lago, in Palm Beach, Florida.

The endorsement may come as a shock to voters who watched Trump compare Dr. Carson to a child molester. He based this comparison on a passage from Carson's 1990 autobiography, "Gifted Hands," where he shares his experiences overcoming pathological anger and had Trump jumping to the ludicrous conclusion that pathological anger and pedophilia were one and the same. Trump also referred to Carson as a "liar," and being "too low energy" at different points throughout their opposing campaigns. Some feel that this endorsement negates any remaining credibility the once popular Carson had with voters.

And what will Dr. Carson's possible endorsement mean for Trump? Well before the announcement that he would throw his lot in with Trump, Carson still had some strong support, particularly in the Evangelical voting community, which would certainly help Trump. Not to mention the thousands of grassroots supporters who raised millions of dollars for the Carson campaign. And his endorsement might take away any unwanted attention away from tonight's Republican debate... much like New Jersey Governor Chris Christie's Trump endorsement took the spotlight after the GOP debate.

Either way, the endorsement will only fuel the seemingly unstoppable rocket that has become Donald Trump's campaign to become the next president. And in case you're wondering the answer is yes, I am still in shock every time I type that.