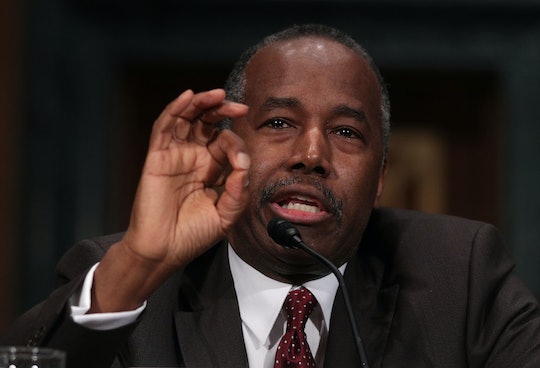 Dr. Ben Carson was in the hot seat on Thursday during his Senate committee hearing to become the secretary of Housing and Urban Development under the incoming Trump Administration. The neurosurgeon was asked point blank by Sen. Elizabeth Warren to assure the Senate that "not a single taxpayer dollar will financially benefit" President-elect Trump or his family. And that is where things really got awkward at Carson's Senate hearing.

I can assure you that the things that I do are driven by a sense of morals and values, and therefore I will absolutely not play favorites for anyone.

Naturally Sen. Warren, who isn't exactly known for being easing dissuaded from her course of action (and this is why we love her), pressed on:

Do I take that to mean that you might manage programs that might significantly benefit the president-elect?

This had Carson responding:

You can take it to mean that I will manage things in a way that benefits the American people. That is going to be the goal. If there happens to be an extraordinarily good program that's working for millions of people and it turns out that someone that you're targeting is going to benefit, you know $10 from it, am I going to say no, the rest of you Americans can't have it? I think logic and common sense probably would be the best way.

Which could be construed as a long way of saying, No comment.

Dr. Carson, a former Republican presidential candidate and one-time political opponent of Trump's, never directly answered Warren's direct questioning. Instead, he said that it would not be his intention "to do anything to benefit any American. It’s for all Americans, everything that we do.”

He then said that he would not limit or cut a program if "someone" benefited from that program... three guesses as to who that someone might be. Sen. Warren brought the awkward line of questioning to a close by calling out President-elect Trump for his refusal to share his tax returns with the American people, and reiterating the Senate Democrats' suggestion from earlier this week that Trump should put his assets into a blind trust.

Carson, who has no experience in the area of housing and urban development, spent much of his time at the Senate confirmation hearing devoted to discussing the poor state of low-incoming housing and the health concerns therein. He told the Senate committee:

I am passionate about health as you may have guessed, and where one lives should not cause health problems. So I look forward to working with HUD's Safe and Healthy Homes program and others on these issues. We cannot have social mobility without a strong healthy foundation in the home.

If Carson's nomination is approved, he will be at the helm of 8,300 employees, and be in charge of a budget of around $48 billion.