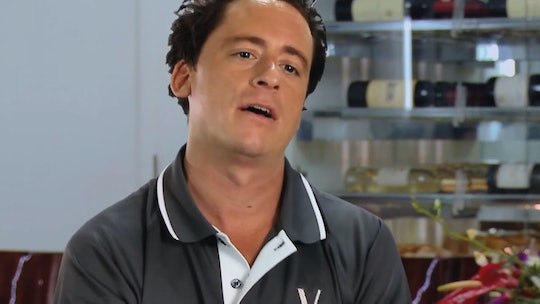 So Basically, Ben From 'Below Deck Med's Instagram Is Exactly What You'd Expect

If you can't keep up with the chefs on Below Deck Mediterranean Season 4, you're not alone. Early on, Chef Mila Kolomeitseva was let go from the Bravo reality series, and stewardess Anastasia Surmava filled in as temporary chef. However, Anastasia stepped down in the Aug. 19 episode, which meant Captain Sandy Yawn had to find a replacement. Luckily, fan-favorite Ben Robinson was up for the task. And for those of you who haven't been following the original crew member's career since he left the show, Ben from Below Deck Med's Instagram tells you exactly what he's been up to.

As with most reality star Instagram accounts, Ben's feed — which can be found under the handle @benstogram — is jam-packed with self-portraits and promotional photos of his private catering business. However, if you happen to love Below Deck Med just as much as the culinary arts, you might want to consider giving Ben a follow. The British chef frequently posts pictures of food, and I can already hear my stomach growling. In the past month alone, Ben has uploaded pics of lobster jelly, beef tartar, and tortellini. So basically, don't look at his profile if you're hungry, because you might sign up for a Sirocco tour just to get a piece of Ben's creations.

From the looks of his Instagram, it's pretty clear Ben has been perfecting his culinary skills since he left the Bravo franchise after four seasons of 2013's Below Deck and one season of 2016's Below Deck Med. The reality star then confirmed it when he spoke with People about his return to Below Deck Med.

"I took a couple of years off and really built a career for myself on land, specifically a private catering business for private events," Ben shared. "I fly around and do exclusive parties, both corporate and private, all over America. I’ve been running that successful company on land for many years now, so I’ve really been sinking my teeth into that business."

Ben also explained how he felt in regards to his big comeback to the galley, describing the experience as "surreal."

"I wasn’t inundated in it season after season. I sort of saw it through fresh eyes," Ben said. "Plus, I’m a little more mature now, a little more level-headed, and obviously older. But it wasn’t easier, I can tell you that. It’s a tough program being trapped in a galley and given an incredibly tough workload. It’s no joke! You’re working 19, 20 hours a day."

Despite his grueling hours on the Bravo reality series, everyone seems excited about Ben's reprising role as chef on Below Deck Med. Even Captain Sandy had a few kind things to say about his return.

"The passion that Ben has and what he does is the passion that I have and what I do. And when you have passionate people together, that makes the most amazing experience for the guests," she told People. "That’s what my industry sometimes lacks, that passion for your job. And Ben loves food. He’s a real chef. He rules the galley. He’s amazing."

Now that Ben has had a few years to simmer down and learn a few tricks to improve his culinary techniques, it'll be interesting to see where he takes things on Below Deck Med. Who knows? Maybe he'll stick around for the long haul.