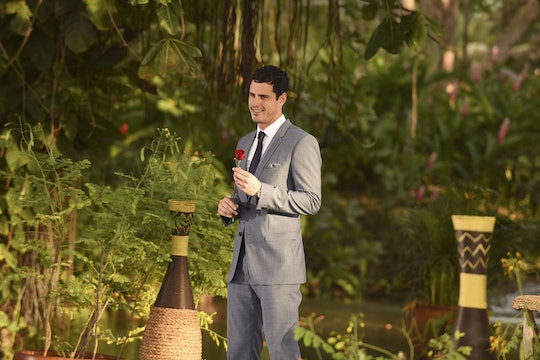 Ben Higgins Proposes To Lauren B. On 'The Bachelor' Finale, Because They're Each Other's People

As we neared the finish line on Season 20 of The Bachelor, Ben Higgins was faced with the harrowing decision of proposing to one of two women he openly admitted to being in love with. Was it going to be Lauren B. or JoJo? The promo for the finale left the final episode looking somewhat chaotic, as we saw glimpses of Ben struggling with his choice, even going so far as to call someone over the phone in tears as he's getting ready to propose. Ultimately, though, Ben proposed to Lauren B. on The Bachelor finale, sending JoJo home with, well, his love.

Just before meeting Lauren for the final time, Ben placed a call to her dad, Papa Bushnell, asking him for her daughter's hand in marriage. He eagerly gave his blessing, along with the whole Bushnell family's blessing, and, after Ben hung up, The Bachelor eagerly threw up a fist pump and a "WOO!"

Ben opened his proposal to Lauren with his usual shtick about how he entered the show feeling unlovable, and described The Bachelor process as "a journey of goodbyes."

"But Lauren, I never want to say goodbye to you," he revealed to her beaming smile.

"I want to wake up every morning and kiss you on the face. I want to go to bed at night and know that, in the morning, I'm going to wake up to the most beautiful woman I've ever laid eyes on. My desire from here on out is to live for you, to commit to you, to love you, to hold you, kiss you a lot. Lauren, I want to spend the rest of my life with you. Lauren, will you marry me?"

She accepted in a fit of giggles and tears and "oh my god"s. After a bunch of those aforementioned kisses, Ben tenderly feigned seriousness and said, "Lauren! You're my person!"

"You're my person," she replied, satisfying the Grey's Anatomy crossover fandom of Bachelor Nation.

Most Bachelor fans were surprised by Ben's openness in saying "I love you" to two contestants before the finale, but saying it served as an effective barometer for who he should send home after Fantasy Suite week. While he felt comfortable saying "I love you" to both Lauren B. and JoJo, Ben couldn't quite manage to get it out in response to Caila, who also said "I love you" to him in Jamaica, along with the other two women. Whatever internal obstacle was preventing Ben from returning Caila's love, he took it as a sign that she was the natural choice to go home, since he was clearly connecting to feelings of love for Lauren and JoJo. Caila got dumped by surprise (but it seemed marginally more dignified than getting dumped in front of the other women) before the rose ceremony even began.

Ben's other big obstacle was JoJo's family, who didn't exactly believe Ben had the best intentions for their daughter during hometowns. Her brothers, especially, put a lot of pressure on Ben and were totally dismissive of what JoJo wanted. Ultimately, that may have factored in to Ben's final decision, even if it wasn't something that should have played a big role.

JoJo's relationship with Ben always seemed more complex, with her emotions running more raw, vulnerable, and honest. Ben admitted that he had never been through anything especially trying with Lauren, but apparently his faith in their relationship is strong enough that he's willing to take a gamble on the idea that they can withstand hardship together, too.